Actors' Playhouse at the Miracle Theater 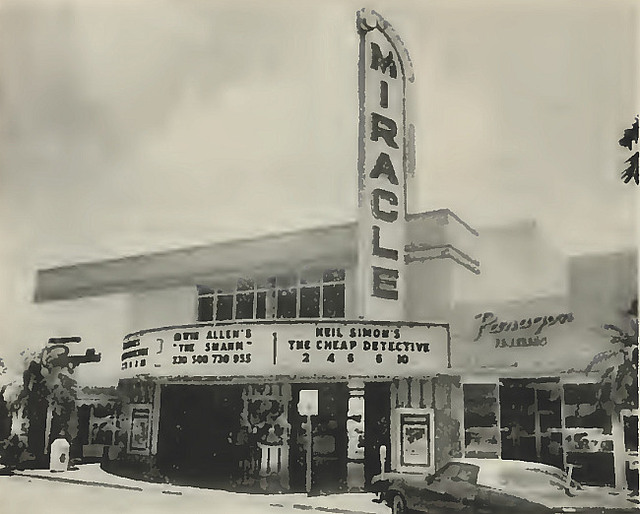 The Miracle Theatre opened on December 7, 1948 with Glenn Ford in “The Return of October”. It was a neighborhood movie house with 1,600 seats, which were located on the main floor and a seperate raised section at the rear. Its sumptuous Streamline Moderne lobby, foyer and marquee welcomed visitors to the movies for decades. On June 23, 1978 it was twinned and renamed Miracle Twin Theatre. It became the Miracle 4 Theatres on November 23, 1983.

The City of Coral Gables purchased the historic movie house and, in 1990, the Miracle Theater began a $6.5 million dollar renovation to become the home of the Actor’s Playhouse.

It closed as a full time cinema on April 12, 1995. The Miracle Theater became a performing arts center and returned the theater to its original Art Moderne opulence. Workers stripped off fibreglass wall coverings to reveal green-and-white Deco floral patterns, 1947 designs that had been hidden for years. The lobby was returned to its original elegance with refurbished hardwood counters and wall paneling, restored Art Deco lighting fixtures and signage, and a period-inspired carpet.

Restoration of the beautiful 600-seat Mainstage auditorium was completed in 1995. Mainstage has a proscenium opening 45' wide by 22' height.

In 1988, a portion of the large former balcony became the 300 seat Balcony Theater. The Balcony Theater is used for childrens theatre, smaller productions and by community cultural groups.

The Black Box Studio is also on the second floor. It seats up to 100, and has panels that can divide it up into three rooms. The Black Box performance space is designed for innovative new work, cutting-edge experimental theater, and to provide space for rehearsals, educational programs, and visual arts exhibitions.

Today, the Miracle Theater is still the home of the Actor’s Playhouse theater company. It is a cultural and performing arts center for the community that truly reflects the greatness of the theater’s past.

There has never been another Miracle Theatre in South Florida except for this one, Chuck. I went there when it was a single, a twin and also when it was a quad. It was then restored to a single screen for plays.

How could a theatre at 3465 N.W. 2nd Avenue ever have been in Coral Gables?

I remember the Coral, the Gables and the Miracle. Huricane Andrew took the ornate sign of the Miracle, which is now a playhouse, and the other two are gone.

This page of Showmen’s Trade Review for August 20, 1949, features six photos of the Miracle Theatre.

In 1992 or 93 some scenes for the feature “Wrestling Ernest Hemingway” were filmed in the Miracle Theater. I remember reading a Miami Herald article about the screenwriter being from South Florida, seeing it mentioned on tv news, and walking by and seeing the area closed off for production.

When the film was released it played at the Miracle – and I just had to see it in the cinema where some of it was filmed!

I had the interesting experience of sitting there watching the film… and suddenly the scene on the screen is in the lobby behind me, that I had just walked through to get to my seat!

Richard Harris is a theater employee who takes the ticket of theater-goer Shirley MacLaine (if I remember all this correctly). They are standing by what may still be the restrooms on the right side of the lobby near a staircase. Then they are in a movie theater with a film playing – most likely in the same theater where I am sitting watching this, or in one of the adjacent others in the same building!

I used to go to the children’s matinee on Saturdays, approximately 1970 – 73. Is there one site that would list the films each summer? I am trying to avoid combing through the Miami Herald files online (if they exist).

1948 Grand Opening photo courtesy of The Actors Playhouse at the Miracle Theater.

I walked by a couple days ago and noticed the classic box office on the sidewalk seems to be a tourist information kiosk during the day, then reverts to being the Playhouse box office when there is a show, so perhaps “Information Kiosk” could be added to the functions list.