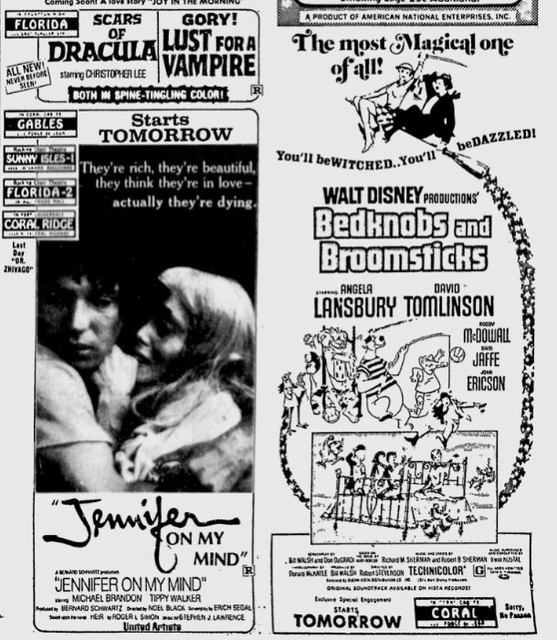 The Coral Theatre was a single-screen house which opened on Fecember 29, 1940 with Judy Garland in “Strike Up the Band”. It housed the Miami premieres of “The Exorcist” and “A Clockwork Orange”. It was closed in 1982.

Hey Ripshin. I’m 46, so just a few years behind you. We only lived in Miami for a year and moved back to our native New York City in the summer of ‘72, but I have fond memories of all the moviegoing the family did while in Miami. In addition to the Disney fare at the Coral and Twin Gables, we frequented many a drive-in double and triple feature. That early exposure to such lurid titles as “Blood on Satan’s Claw,” “Cat o Nine Tails,” “Return of Count Yorga” and “The Beast in the Cellar” struck a chord in me that would resonate for years. Some years later, as a teenager back in NYC, these early B-movie experiences would lead me towards the grindhouses of 42nd Street and Times Square, seeking out similar fare to that which had so entertained and thrilled me at such a young age at the Drive-Ins of Florida.

I posted a couple of images from old Miami News editions, concerning the engagement here of “A Clockwork Orange.” Seems that the movie had been scheduled to open at the Coral on February 18th, 1972, in an exclusive South Florida run. That engagement, however, was cancelled by none other than Stanley Kubrick himself. While the article states that no official reason was given, it is intimated that the film’s reputation as a “dangerous” work that might possibly incite outbursts of violence might have been the rationale for the cancellation. The article also hints that the root cause may have been over the film’s advertising. As commented earlier in this thread, the Miami newspapers held all “X” rated films (as “Clockwork” was rated on its initial release) to two inch block ads, with no display advertisement allowed – placing a serious film like “Clockwork” in the same category as a porno flick.

The article also notes that the owners of the Coral, Florida State Theaters, planned on campaigning for a Miami showing of the movie despite the cancellation. Eventually, Kubrick must have relented, because the film finally opened at the Coral in the middle of April, 1972. Online editions of the Miami News are not complete for the period, but the block ad appears as early as the April 17th edition, which would lead me to believe the film must have opened the previous Friday, April 14th.

By the way, the manager of the Coral got the last laugh on the idiotic Miami Herald policy. On opening day of “Clockwork” he got Warner Bros. and a local record store to co-op a full page ad for the soundtrack album in the entertainment section.

Al, did the Herald accept ads for adult cinemas in the 1970? Many newspapers refused then outright.

Rivest, they accepted them without art work and only one column by two inches for non-mainstream titles by 1970.

The refused ads for the premiere of “I Am Curious (Yellow)” at the Flamingo but later accepted them when the film moved over to the North Miami.

Across Aragon Avenue from what had been the location of the Coral is the Colonnade Hotel. At one point in its history many decades ago the hotel had been a movie studio. A few years ago I noticed a picture of the exterior of the building during its studio years included in some historic photos on the walls of the hotel’s second floor lobby.

Across Ponce de Leon Blvd from what would later become the location of the Coral was the Dream Theater, the city’s first cinema that opened and closed in the 1920’s.

On May 7th, 2016 I stopped by the Colonnade Hotel mentioned in my previous post above this one. The grouping of four photos of the exterior of the building during different usages in its history was still on the wall on the second floor above the Aragon Avenue entrance. One photo shows “Colonnade Pictures” on the top of the building above Miracle Mile. The caption says from 1940 to 1942 it was a movie production studio before becoming a parachute factory for World War II.

I Googled and found a list of three films for “Colonnade Pictures Corp“ on the AFI website, including “The Marines Come Thru“ (1942, “produced at Colonnade Studios, Coral Gables, FL”), “Murder on Lenox Avenue”(1941), and “Sunday Sinners”(1941).

Definitely saw “Jungle Book” here. Also, remember watching them tear it down in the 80s. 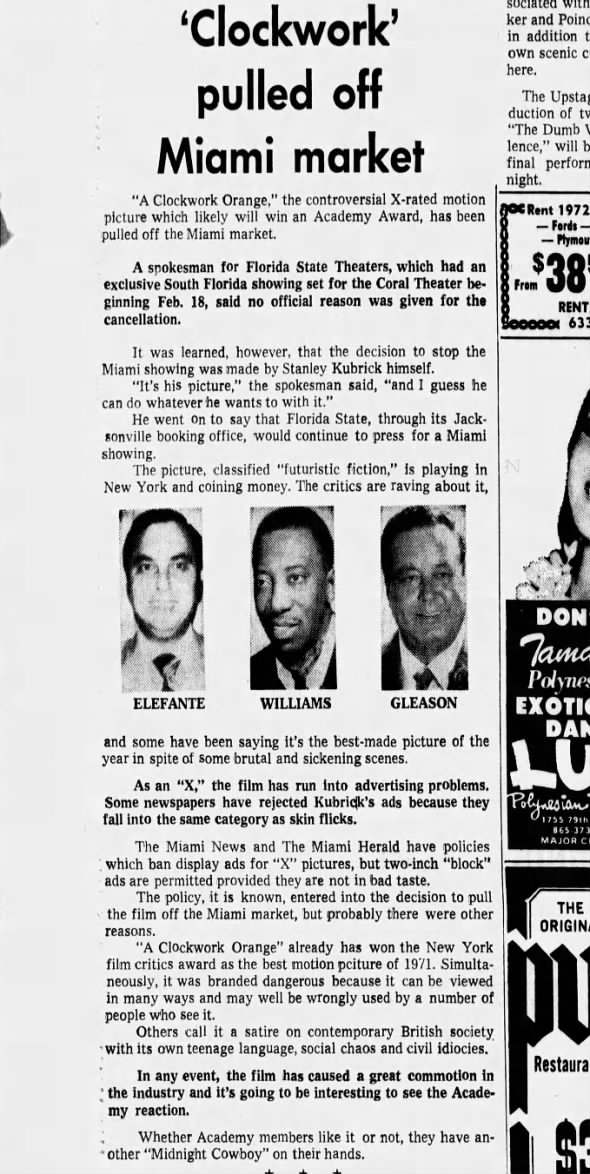 The Coral (Paramount) opened on December 29th, 1940 with “Strike up the Band”. Grand opening ad posted.