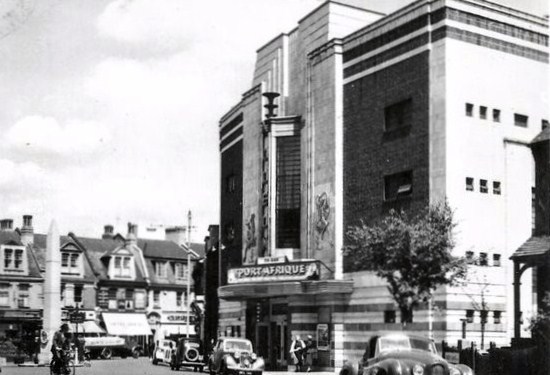 Located in the outer southwest London district of East Sheen. The exhibitor Joseph Mears demolished his 1910 built Picturedrome in 1929. He commissioned the architectural firm Leathart & Granger to design another luxury Kinema to add to his chain, which included Kinema’s in affluent districts of London, at Richmond ( still operating as Odeon cinemas in 2013), Kensington and Twickenham (both now demolished).

The Sheen Kinema opened on 22nd December 1930 with Joe E. Brown in "Hold Everything" and Kenneth MacKenna in "Crazy That Way". The facade of the Kinema had a decorative stone bas relief sculpture on each side of the entrance, depicting Art Deco style figures designed by sculpture Eric Aumonier. The name ‘The Sheen" was placed in a central vertical lightbox over the entrance. Inside the beautiful Art Deco style auditorium, seating was provided in stalls and circle levels. There was a Holophane lighting system which had over 600 combinations of colours to illuminate the space. The Sheen Kinema was equipped with a Christie 2Manual/8Ranks organ, the console was on the left of the orchestra pit, but was not on a lift.

As all the chains' Kinemas had their location as their name, they were required to be re-named at the beginning of World War II in case German parachutists ever came upon them and could pinpoint their location. The Sheen Kinema was re-named Empire Cinema from July 1940.

It was taken over, together with the rest of the Joseph Mears Theatres Ltd. circuit, by Oscar Deutsch’s Odeon Theatres Ltd. chain on 3rd January 1944. It was re-named Odeon on 17th June 1945.

The Rank Organisation closed the Odeon on 3rd June 1961 with James Robertson Justice in "Very Important Person" and "Jet Circle". The building was demolished a month later in July 1961, and an office block with some retail use named Parkway House was built on the site.

The address of this cinema was Sheen Lane (at the junction with the Upper Richmond Road West), not Sheen Road. The two addresses are c2 miles apart. It’s a great shame it was demolished. The building that was erected in its place (Parway House) is an ugly 1960s office block.

From August 1951 until some time in 1955 we lived in Cedar Court, right opposite the Odeon cinema. We could see it from our lounge window. I spent many happy hours there. I was 14 when we moved to Sheen and 17 when we left. I took a girl called Jennifer there on my first date. I loved the Saturday morning performances for the kids, but it was so noisy you couldn’t hear what they were saying! I go to a school reunion every 18 months and do a nostalgic “walk to school” right past where the odeon used to stand. Great shame it was closed. It was a very majestic building – unlike the ugly office block that now stands in its place.

Met my first and only soulmate here in about 1950 and foolishly lost her.

I lived in Barnes and used to go to The Sheen in the 1950s for Saturday morning picture. A lady played the organ and the noise from us kids was so loud the manager kept stopping the film and telling us to shut up. Lovely cinema. Happy days.