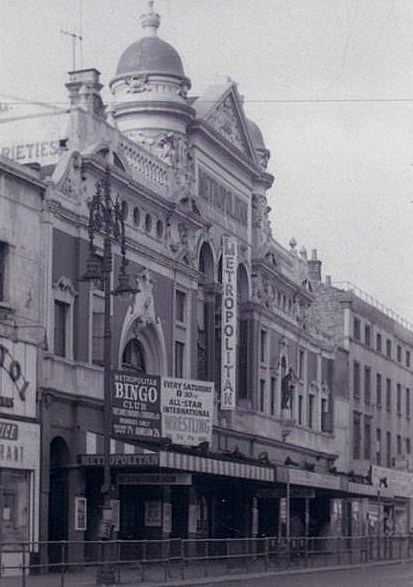 Originally on the site was the White Lion Inn of 1524. It was re-built in 1836 as a concert room, known as Turnham’s Grand Concert Hall, which was rebuilt again in 1862, with a seating capacity of 2,000, and soon became known as the Metropolitan Music Hall.

In 1897, it was rebuilt to the designs of noted theatre architect Frank Matcham as the Metropolitan Theatre of Varieties. It opened on 22nd December 1897, with a variety programme that included Tom Costello, Kate Carney, Fred Russell & Alexander Dagmar. The theatre was owned by Henri Goss.

There was an imposing Neo-Classical style façade along the Edgware Road. Inside the auditorium there was seating for 307 in the stalls, 315 in the pit, 432 in the balcony and 600 in the gallery. There were two stage boxes each seating 14, one on each side of the 30 feet wide proscenium, and each box was ‘supported’ by two naked female figures. The theatre was licenced for 294 standing room places.

The interior decoration was carried out by James M. Boekbinder, who painted the four pictures in the ceiling alcoves which depicted ‘Old English Merry Making’, ‘Indian Festival’ ‘French Carnival’ and Spanish Revelry'. The interior was described to be in a Flemish Renaissance style, with a magnificent highly decorated ceiling. An unusual feature of the Metropolitan Theatre of Varieties was the triangular shape of the stage, which was due to site restrictions, the back wall being a point in the triangle, and the actual working space on the stage was only 19 feet deep. There were eight dressing rooms and one chorus room which could accommodate 10. The orchestra pit could accommodate 14, and there was a resident 11 piece orchestra. There was a ‘long bar’ at the rear of the stalls which had a glazed wall so people in the bar could see the artists performing on the stage while that were drinking in the bar.

affectionately known as the ‘Met’, the theatre was always independently operated, and was successful for many years. Films were screened as part of the variety programme in the early days, and featured more films in the period 1910 until the outbreak of World War I in 1914. In the 1930’s it was re-named Metropolitan Music Hall. It screened double feature films on Sunday’s only, due to live performances being prohibited on that day of the week. It was equipped with a British Talking Pictures(BTP) sound system.

In later years it became the Metropolitan Theatre and had small touring stage productions, but by the mid-1950’s, with the introduction of commercial TV and like other variety theatres trying to survive, it tried everything. It was taken over by the Granada Theatres chain of cinemas but retained its live show use. It was re-named Metropolitan Music Hall again and had gone back to occasional one night variety shows, with a mix of Old Time Music Hall, and an Irish variety season. On 28th March 1960 a company from the Pyke Theatre in Dublin presented a play "Posterity be Damned" in an attempt to establish an Irish theatre in London, but it was not successful. The theatre was last operated by Mecca Ltd, known at that time for their dance halls (as organised bingo was still not legal). They staged wrestling on Saturday nights, and occasional variety shows, but its days were numbered.

The theatre had been purchased for £150,000.00 by the London County Council for a road widening scheme which would incorporate the new Harrow Road fly-over. The theatre was closed in June 1963 and demolished later in 1963. Actually this proved to be rather unnecessary, as the road widening never happened. The high-security Paddington Green Police Station was built on the site and continues today.

The Metropolitan Theatre was used as a location for the 1950 British crime thriller “The Blue Lamp”, starring Dirk Bogarde & Jack Warner. Scenes were shot in the famous long bar and also in the auditorium where Tesse O'Shea is performing on stage, and there are other scenes in the neighbouring area.