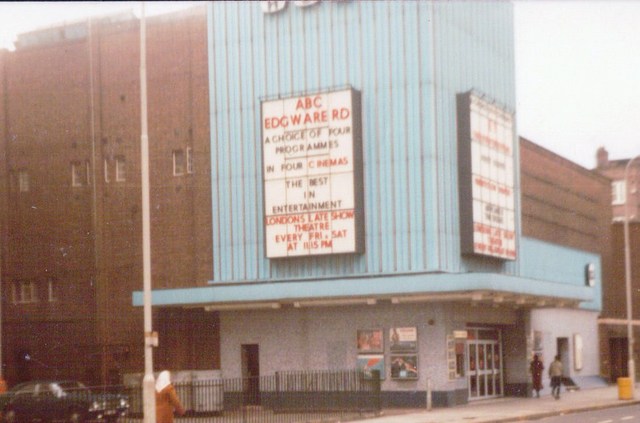 Located in the west London inner-city district of Paddington at 33-51 Harrow Road near the corner with Edgware Road. Built for and operated by Associated British Cinemas (ABC) this was named in advertisements initially as Regal Harrow Road (to save confusion with the not too far away Regal Cinema (later Odeon) Marble Arch).

The Regal Cinema opened on 12th September 1938 with Jeanette MacDonald in “The Girl of the Golden West” and Will Hay in “Those Were the Days”. It was designed by ABC’s house architect William R. Glen and had the main entrance set to the left of the building, the auditorium ran parallel along Harrow Road to Harbet Road. Inside the auditorium seating was provided for 1,234 in the stalls and 746 in the balcony. A Compton organ was ordered but never installed.

Due to its close proximity to the main Edgware Road, it was re-named ABC Edgware Road from 27th November 1961. The facade over the entrance was clad in blue metal sheeting to give a more ‘modern’ look to the building. It gained a position of screening the ABC North London release films concurrent with their West End screenings or at least one week before the rest of the ABC cinemas screened them and was advertised under West End cinema columns rather than ‘local’ cinemas.

The ABC was closed by new owners Cannon Cinemas on 11th August 1988 and the building lay empty and unused for many years. It was purchased by the newly built Hilton London Metropole Hotel who wanted the space for a conference centre. Rather than converting the building, they demolished it in August 1994.

I remember going past this cinema on many occasions and always thinking how hideous it looked with that awful blue metal cladding. If my memory serves me it looked a huge building. I hope someone has a photo or two they may be able to post here?

Yea just as hideous as i remembered.

A set of 36 vintage photographs of the ABC Regal Edgware Road:
View link