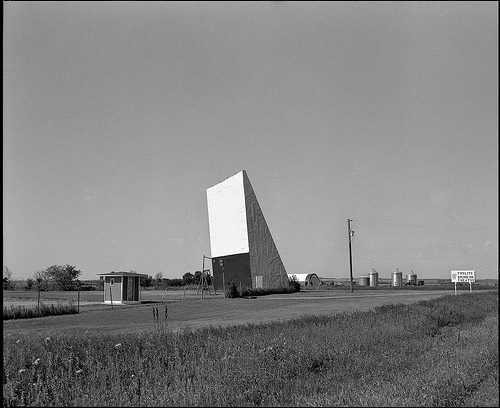 This drive-in is located aprox 100km (1hr) from the city of Regina.

According to an August ‘09 report on the Twilite, they’ve been cited for 2 items, one critical involved handwashing practices/facilities. The other related to garbarge removal. Re-inspection priority has been deemed: Moderate.

The Twilite FB page says in opened in 1954. That is a 1950’s screen tower. Plus,I uploaded some pictures from the FB page.

The Town of Wolseley web site says: “Wolseley is home to Saskatchewan’s first drive-in theatre. Stan Zaba, with the help of a few local people, built the drive-in which opened in June of 1954 accommodating 225 cars. 50 years later, the Twilite Drive-in is still going, operated by Stan’s son, Don.”

Looking at the aerial view, I’m more inclined to believe a capacity of 225 rather than 436.

Also, a 2016 CBC article quotes owner Don Zaba about the need for a digital projector in 2013. “We did a fundraiser in the town of Wolseley which was a success. We ended up buying the projector and a sound system and we’re operating today,” he said.