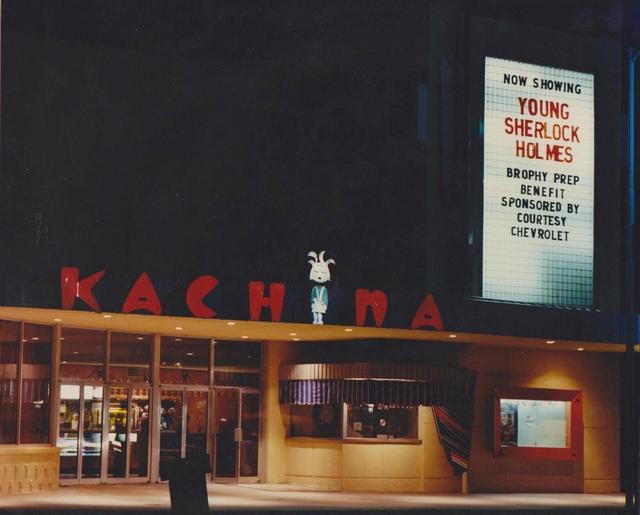 Opened in November 10, 1960, this theatre had virtually no lobby, small restrooms, and a smaller snack bar. The seating area held up to 600 people. The screen was curved and huge. The outside had a Cinerama logo, but by the time it closed, the inside looked like it had been remodeled to a shoebox length (a BIG shoebox length).

The architect of the Kachina Theatre was Ray Parrish, according to the article about the house in the April 10, 1961, issue of Boxoffice, which can be seen on this web page at incinerama.com.

incinerama lacks internal links, so if anyone wants to explore the site here’s their front page.

This was one of the last great single screen theatres in the Phoenix area. I had the pleasure to see some big screen titles there including The Deer Hunter, The Last Emperor and The Mission. Also saw Fatal Attraction there opening weekend. The Kachina had a small lobby and a great big curved screen. Sad too have seen this one close as the Now defunct Galleria put this single screen out of business.

I remember my parents taking me to see How The West Was Won. I was only about 9 years old, so I don’t imagine I sat for 3 hours then. Just finished watching HTWWW and watched it to the end; 55 years later. Decided to search on Kachina, and glad to see what the theater looked like. Wish my parents were alive to call them up and tell them about Kachina. Happy and sad both at the same time right now.

I loved this theater so much growing up in Scottsdale in the 80’s. Does anyone remember (or were you at) the opening night of Return Of The Jedi? There was a line double wrapped around the theater. I wasn’t there early enough for the first showing of the night but caught the second showing. Some kids came out after the first showing and shouted “Darth Vader dies”. Still kills me to think about that. What a great time to live in there! Think I’ll go over to the Grapevine for a lavish pizza now or hang out at The Backstage and Alley Cat! 😁

I believe it was still there when I lived in Phoenix briefly in 1994. The exterior was beautiful, “Kachina” spelled in beautiful lettering, but I unfortunately didn’t get to see any film there. One film they presented was the restored “El Cid,” (restoration supervised by Martin Scorsese), which I could really kick myself for not seeing in that particular theater. They had prepared the restoration for a laserdisc (Criterion?) and were using screenings to promote the laserdisc, if I remember correctly. I believe the new print of “El Cid” was in 35MM, and I had hoped for a 70MM version. Maybe that’s why I put if off and then missed out all together. What a pity to lose such a beautiful stand-alone theater.

Someone mentioned “How The West Was Won.” So this theater was capable of showing 3-strip Cinerama? So wish I had taken pictures of it too…

I’m passing along the link to a new historical article about large format and roadshow presentations at this and other Phoenix area cinemas.

I worked there while in high school during Batman and The Abyss, was there on the closing ceremony. Still have some of the letters from the marquee outside.

I added some new pics in the photo section of the Kachina and a newspaper advertisement for Kubrick’s 2001: A Space Odyssey