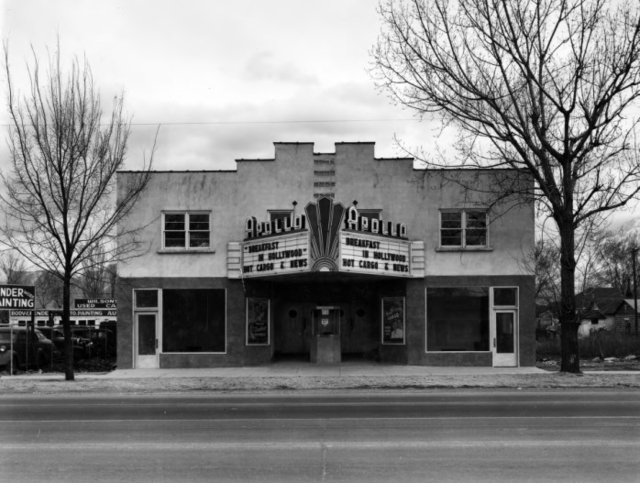 Originally named the Apollo Theatre and opened December 31, 1946 with Errol Flynn in “San Antonio”. It had 500 seats. It was renamed Avalon Theatre February 28, 1963 and mainly showed second-run or classic films, with a hypnotist show on Saturday nights.

After closing as a movie theatre it was mainly used for concerts. Renovations were carried out in March 2012 and it reopened as the Utah Children’s Theatre with a reduced seating capacity of 210.

I guess my feelings for the Avalon were colored by getting a Vandermeade 33 rpm record in a BIG box as a white elephant gift at a HP Christmas party a few years ago.Other folks got good stuff.

The most famous hypnotist to ever grace the Avalon was Spencer who was billed as the world’s fastest hypnotist. He was there over 4 years and had a very loyal following. After he left other hypnotists tried to fill his shoes but all failed. Then a concert hall took over and they are having problems with the building structure.
Anyhow, like thousands of others, I will always remember the Avalon because of Spencer. He is at www.sleepnow.com if you want to follow up his adventures.

The “Lost Memory” photo makes mention of some TLC needed and I fully agree. The only reason the theater is still in operation is mainly due to the guts and determination of owner; Art Proctor -a real gentleman when I worked for him.
Mr. “P” also operates the video rental store next door which helps with the rent but he really needs some VOLUNTEER HELP. I wish I still lived in SLC but have retired to Long Beach, Ca.

We have a similar situation regarding the little Art Theater here. It’s the last remaining single screen house with awful video projection and seating that should have gone down with the Titanic. Another situation is the total arrogance of those working there!

Here’s a little known fact about the Avalon Theater. While I worked there doing my comedy hypnosis show for 320 weeks, the longest running comedy hypnosis show ever developed, we had a ghost. We simply called it the Avalon ghost. Many times I would hear the ghost talking when I was there alone. James who used to work there in those days also was very aware of the ghost. One of my crew also ran into the ghost one day. Art would just raise his eyebrow about the ghost.
Spencer
http://www.sleepnow.com

Not sure… just google the avalon theater salt lake city to find out. I’m sure movies are not there. Last time I was in SLC it was just for concerts, all the chairs gone~~

As of March 2012 the Avalon Theatre has become the new home of Salt Lake City’s nomadic Salt Lake Children’s Theatre and School of Arts. The theater company has been operating in Salt Lake City for nearly 30-plus years, bouncing around to several venues, including the historic, downtown Utah Theatre (now being considered as a showcase & site for the Utah Film Center). The Avalon has undergone complete renovation to make it work for the children’s theater company — new roof, upgraded electricity and a new “thrust” style stage.

The newly renovated space will have seating for 200 or so patrons, arranged so that even small children will be able to see the stage. The theater company’s web site is www.tctheatre.org. For details on the move, see Rosemary Howard’s story that was published on March 12 in the Deseret Newsw (www.deseretnews.com).