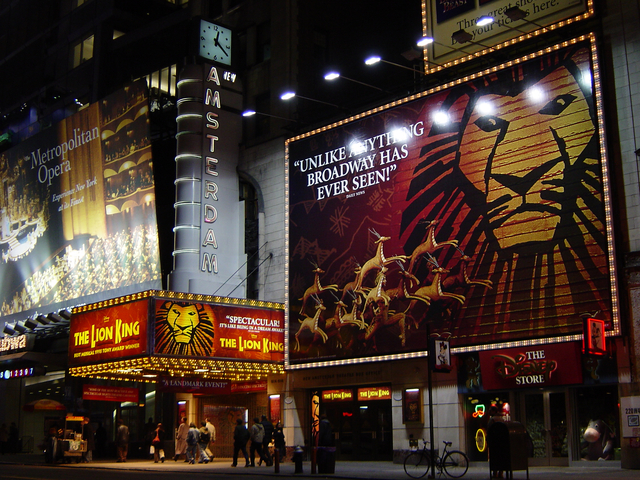 The New Amsterdam Theatre was opened as a live theatre on October 26, 1903 with a production of Shakspeare’s “A Midsummer Night’s Dream”. The theatre was the first to be designed by the young architects Herts & Tallant, who had just returned to New York from a trip to Paris France, where they had seen examples of the ‘new’ Art Nouveau style, and they incorporated this in the design of the theatre. The New Amsterdam Theatre is a rare example of this style in the United States, and here it is certainly one of the most scrumptious examples of the style. The building also contained the 680-seat Ariel Gardens Rooftop Theatre which opened in June 1904 with Fay Templeton in “A Little Bit of Everything”, a musical revue.

The main house became well known as a venue for the lavish “Ziegfeld Follies” from 1913 to 1927, featuring stars such as Ruby Keeler, Fred & Adele Astaire, Al Jolson, Fanny Brice, Marilyn Miller, Eddie Cantor, the Dolly Sisters, W.C. Fields and Helen Morgan. The New Amsterdam Theatre was closed as a live theatre in January 1937, with John Houston in Shakepeare’s “Othello”.

It reopened as a 1st run movie theatre in June 1937, with the Warner Bros. all star movie “A Midsummer Night’s Dream”. An Art Moderne style sign was designed for the front of the theatre by noted architect John Eberson. The Ariel Gardens Rooftop Theatre was renamed Frolic Theatre and was closed on November 16, 1943 with Jim Bowles in the play “Goodbye Again”. It was converted into a rehearsal space and later a television studio, which was closed in spring of 1982, and still awaits restoration.

The New Amsterdam Theatre was closed as a movie theatre in 1985. It was purchased by the Nederlander Organization, who hoped to restore the building back to live use, but neither the 42nd Street area it was set in, nor the the time was right, and the entire building gradually began a downward spiral of dilapidation.

Purchased and restored by the Walt Disney Company in 1995-97, the New Amsterdam Theatre was the centerpiece of the Times Square renewal of the 1990’s. Though the interior had become a wreck, no expense was spared in restoring all of the Art Nouveau details. The Art Moderne sign on the façade was retained as a very interesting attribute to the theatre. Because the New Amsterdam Theatre reopened as a flagship showplace for Disney’s live shows, so much redevelopment occurred in Times Square that after a lull of decades, the area once again became crowded with pedestrians and an entertainment and commercial hub for the city.

In 1971 Bette Davis and Ernest Borgnine starred in “Bunny O'Hare” and here is an excerpt from the New York Times' review:

“Also on the bill with "Bunny O'Hare,” currently at neighborhood theaters, is “The Velvet Vampire,” which is almost as funny as “Bunny O'Hare,” though I doubt that it means to be. It has to do with a beautiful, 125-year-old woman, the mistress of a remote ranch in the southwest who stocks her own blood bank with tourists dumb enough to spend the night.

“It is to be recommended only if you can see it at the New Amsterdam on 42d Street, where audiences loudly, freely and obscenely associate with the action on the screen.”

I saw the 1964 re-release of PSYCHO at the New Amsterdam and part of the fun/horror was the audience.

The New Amsterdam became the first theatre on 42nd Street to present a feature in the CinemaScope process when “The Robe” opened there on December 31st, 1953. Ad for the saturation release which followed the Roxy Theatre premiere can be viewed here

This theatre is of particular interest to me because my grandfather Louis Casavant was in a play “The Riviera Girl” at the New Amsterdam, that opened on September 24,1917,he played Count Michael Lorenz. I never met him ,he died 20 years before I was born,and he was was 31 years older than my grandmother Madeline Brown(maiden name)second wife. His first wife was opera star Greta Risley.

The terrific website ibdb.com lists credits for Mr Cassavant going back to 1895 – when he appeared in a production called “The Wizard Of The Nile” at the Casino Theatre. The last credit listed is for a comedy called “Her Man Of Wax” that played at the Shubert in the fall of 1933.

Hey Paul… I didn’t mean to offend. I typed the double S in his name in error – possibly because his IBDB listing lists that spelling as an AKA. I certainly did not mean to imply this was the correct spelling, or intend to call you out for not knowing how the name was spelled. In fact, the only intention of my comment was to point out the first and last credits attributed to him on that page. Apologies if it was taken in any other spirit! I don’t like to engage in the petty flame wars that often go on within these pages between certain users. I’m all about nailing down the history and sharing the memories! Anyway, seems you have a credit that predates the ones listed on IBDB for your grandfather… have you attempted any contact with the administrators of the website to get the history corrected?

A post script… Looks like the double S spelling as an AKA on the IBDB page may have originated with how Mr Casavant’s name was recorded (obviously in error) for the 1922 production of “Frank Fay’s Fables,” a revue that played at the long gone Park Theatre on Columbus Circle.

Paul Baar might consider donating his collection of photographs and related materials to The Billy Rose Theatre Division of the New York Public Library for the Performing Arts at 40 Lincoln Center in New York City. More details here

PS I just attended the Broadway Backwards fundraiser here tonight, and the house looks as sensational as ever. I remember when I paid two dollars to come watch double features here.