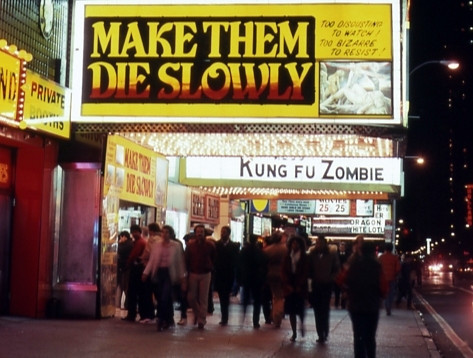 The Liberty Theatre, built in 1904 on W. 41st Street, was designed by the firm of Herts & Tallant in Beaux-Arts style for Klaw and Erlanger. Its lobby opened onto W. 42nd Street, as it was at the time (and still is) the more desired address.

The 100-foot long lobby stretched from W. 42nd Street to the auditorium, which actually sat on W. 41st Street.

The Neo-Classical inspired façade, with a set of caryatides flanking the main entry four stories tall. A huge arched window was surmounted by a carving of the Liberty Bell, and at the summit of the façade was a large stone American eagle, its wings spread and staring downwards to the sidewalk below.

A stunning ticket counter was located in a vestibule in the lobby, which was topped with a large dome, covered in gilding and aluminum. A promenade led to the staircase leading to the balconies and the orchestra seating, with an ivory, amber and gold color theme.

Its auditorium, which could seat well over 1,000, continued the patriotic theme of the exterior, with Liberty Bells and eagles covered with gilt circling the huge ceiling dome and the towering proscenium arch. Again, the ivory and amber color scheme continued into the auditorium. Each side wall featured four sets of opera boxes.

In the basement, luxurious lounges catered to each sex, with the ladies lounge carrying a garden theme, complete with pastel shades and floral patterns, and the men’s being designed in a Spanish countryside theme, with leather and oak highlights.

The Liberty Theatre screened exclusive runs of “Birth of a Nation” in March 1915, “Intolerance” from September 5, 1916 and “The Thief of Bagdad” from March 18, 1924. I remained primarily a legitimate theatre until 1933.

Like most of its neighboring theaters, the Liberty Theatre, rather than go dark, converted from stage shows to movies, and remained a movie house for well over half a century until the revival of 42nd Street began in the early-1990’s.

By 1996, the Liberty Theatre of old was gone, its magnificent Beaux-Arts elements mostly removed, and the rest hidden behind a very ugly boxy marquee. Its front entrance was remodeled in a late Streamline style façade. The interior of the Liberty Theatre had suffered just as badly over the 50 years since its golden days ended, and was decrepit and dirty. Its balconies and side boxes long since closed off, and its original color scheme painted many times over.

However, it was just the appearance that a theater company was looking for, for a short run of T.S. Eliot’s “The Waste Land” which was the Liberty Theatre’s first legitimate use in over six decades. However, it was shuttered as soon as the play closed.

In 1997, plans were announced to convert the Liberty Theatre into a virtual reality arcade. However, this plan fell through. After over a decade laying empty and unused, it was restored and converted into a Famous Dave’s BBQ Restaurant which opened at Christmas 2011, but was closed in 2013. A bar operated from the foyer area and by 2015 the auditorium was used for special events. The bar closed and the foyer space has since been used as a Ripley’s Odditorium, which closed in 2021. On September 29, 2022 the space is in use as a haunted house attraction named “Terror” which closes on November 6, 2022.

According to the ads posted performances were two a day with a variety of prices through the various sections so I assumed it was reserved seats available in advance.

The opening ads for BIRTH OF A NATION state “all seats reserved”.

the intro at top makes it appear this theater never showed films till 1933. which of course not true. this theater held the exclusive first run engagements of some of the most prominent films of the silent era. The Birth of a Nation, Intolerance and The Thief of Baghdad among them.

Well, the Ridley’s Odditorium that had been housed in the former lobby closed last year, but this year that space is being used for a haunted house attraction.

Ridley’s? Thought it was Ripley’s all of these years….

This haunted house experience is called “Terror” and will be in the space from Sept 29-Nov 6th.

Using 20,000 square feet of space, it must be using some areas of the former theatre and in typical Times Square promo way it claims

“Terror Haunted House is a combination of groundbreaking 4-D experience housed in an authentically recreated haunted environment which produces the most Immersive Horror experience to date. You will hear, see, smell, and feel the fear.”

There is also something odd about the photo posted on April 3, 2022: Was the “Why pay more” signage up during the end times of the Brandt theaters? If so, I must have missed that last bit of showmanship…

That board had seen a lot of different signs on it over the years - I remember the faded/peeling “42nd St Movie Center” sign during most of the time I frequented - but there was also the lavish (for the times) Make Them Die Slowly signage up there during that engagement. The pic with the vintage looking “Why Pay More” signage is from 1989, when Bronson’s Kinjite movie came out. That would have been around the time the Durst Organization took over from the Brandt’s - which probably explains why the entrance gates were rolled down. The Dursts probably did a bit of cleanup in the theater, and spruced up that big sign to signal the change in ownership. When the sign was taken down off the marquee back in 1992 (with Lethal Weapon III playing), it was still in the same condition. The Dursts probably didn’t expect the city to be moving forward so quickly and brutally with eminent domain on those newly acquired (and still profitable) grindhouses!

I just posted a pic I found on the Internet showing the sign being removed. I was wrong about one thing, the Lethal Weapon advertisement on the Liberty marquee was for the Selwyn Theatre. Guess the Liberty had already been shuttered for good. I know that within a year or so, only the Harris Theatre would remain in operation out of all the original 42nd Street grindhouses.