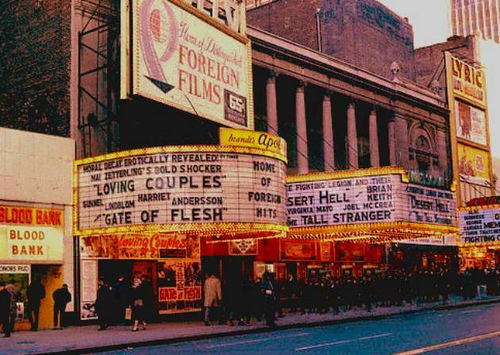 Originally opened in 1910 as the Bryant Theatre, a vaudeville and movie house, this theatre was acquired ten years later by the Selwyn brothers. The theatre was rebuilt, renamed the Apollo Theatre, and given a new Neo-Classical/Neo-Georgian style colonnaded facade on 42nd Street, which it would share with the Selwyn’s Times Square Theatre next door. The theatres were both designed by architect Eugene DeRosa. The Apollo Theatre could seat 1,197 and was designed in Adam style, with 675 seats on the orchestra level, 495 in the balcony, and 27 in the boxes.

The Apollo’s last incarnation would be as the Academy, a concert hall. For this, the theatre’s orchestra level seats were removed and the floor leveled, though the balcony seating remained intact. The original decor was uniformly covered in a dull white paint.

In 1996, after its days as the Academy ended, most of the Apollo’s architectural elements were removed, including the spectacular dome from the auditorium ceiling, to be reused in the Ford Center for the Performing Arts (later renamed the Hilton Theatre, and in 2011 the Foxwoods Theatre), which would be constructed on the site of the Apollo Theatre and neighboring Lyric Theatre upon their demolition.

True. But a big reason for the ShubertShubert dragging their feet on the new theatre on the 45th–46th plot they own (the site of the former Klaw Theatre) is the aforementioned concerns with oversaturation.

The return of the Hudson to legit use is being spearheaded by the Ambassador Theatre Group (the new owners of the Lyric, and the largest owner of West End theatres), not one of the existing big 3. It’s those companies that have resisted adding more theatres, as it would dilute the value of their existing inventory. Apparently, according to the scuttlebutt, ATG looked at the Times Square as well, but the concerns regarding a lack of off 42nd loading area have made them reluctant, as has been the case with prior interested parties as well. The Liberty (which is in far better shape, and has a loading dock on 41st) looks more likely if they were to try to add a third Broadway theatre.

The Apollo theatre was never a Minsky Burlesque. The Minsky’s ran the Republic (New Victory today)The Apollo was operated as a burlesque under Max Wilner and was a burlesque theatre from 1934-1938 Then it was renamed the New Apollo and featured On Golden Pond.

Yeah, and a few pictures played there between its burlesque days and legit incarnations.

The Apollo ran movies for decades, most notably under Brandt management as a showcase for foreign imports after their first-run engagements elsewhere.

I was being sarcastic…

I assume the ad Gerald De Luca just posted for Gold of Naples is the American cut. I prefer it to the original Italian because it is shorter and tighter. And the ending with Mangano at the door seeking entry is so devastating nothing should come after it. One of the great endings. A great film if you haven’t seen it.

How come there was a time when truly beautiful women could be great actresses?

To vindanpar: Yes, the American 4-episode cut was the only version that played commercially in the U.S. In recent decades archives, like MoMA, were able to program the uncut 6-episode version, and it is available on Italian dvd. I don’t have any answer to your query about actresses.