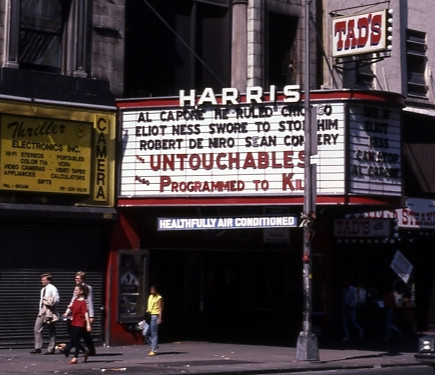 The Candler Theatre and Building, an early work of Thomas W. Lamb, was opened as a movie theatre in 1914 with the Italian version of “Anthony and Cleopatra”. It was located between two larger and longer-established W. 42nd Street theatres, the Liberty Theatre and New Amsterdam Theatre.

It was housed inside a five-story office building, its main entrance on W. 42nd Street, which meant that its lobby ended up being long and narrow, leading to the auditorium, which was closer to W. 41st Street. It also meant that the exterior wall of the W. 41st Street side of the Candler Theatre was banal, and devoid of details, other than then fire escapes which criss-crossed it.

Built in the Italian Renaissance style, the Candler Theatre could seat just over 1,200 in an auditorium which, though not overly large, gave the impression of being much more spacious than it actually was, due to Lamb’s ingenious design.

Its ceiling contained an elliptical shallow dome, ringed by Art-Nouveau style chandeliers, in a floral theme, similar to those at the neighboring New Amsterdam Theatre. The two-story auditorium, with a balcony and two sets of opera boxes flanking the proscenium arch, was minimally decorated, but did include gilded plasterwork around the proscenium and a general color scheme of ivory and gold.

Its 25-foot wide lobby, with its liberal use of marble and more gilding, also had 17th Century style wall panels, decorated in floral patterns. Its foyers were decorated with tapestries depicting scenes from Shakespeare (as this was a playhouse, after all).

The Candler family, of Coca-Cola fame, leased the theatre to impresarios Sam H. Harris and George M. Cohan, who would operate the Candler Theatre as a legitimate house.

In 1916, the theatre was renamed the Cohan and Harris Theatre, and the showmen continued their string of successes into 1921, when Cohan left the partnership. Harris took full ownership of the theater, and it was thereafter known as the Harris Theatre.

A year later, the Harris Theatre made history, with John Barrymore portraying Hamlet and 101 nights in a row, beating Edwin Booth’s old record by one.

Throughout the next ten or so years, the Harris Theatre had many more long running stage hits. The last live show, in late-1933, was not successful, and soon afterwards, the Harris Theatre, like so many of its neighbors, was converted into a motion picture house.

For 55 more years, the Harris Theatre remained a first-run movie house, losing most of its original décor as the years went on, including the tapestries, the chandeliers, the side boxes and its large rooftop signage, which had been added during the Harris Theatre’s 1920’s heyday.

It finally went dark in 1994. There was hope that it might perhaps be restored for legitimate, or stage show use, as the nearby New Amsterdam Theatre was, by the Walt Disney Company.

However, with only its facade saved, the Harris Theatre was demolished in 1997, and its site occupied by the first American branch of the Madame Tussaud’s Wax Museum.

There is a pan along the 42nd street block taking in the Harris Theater marquis at the beginning of Conrad Rook’s film “Chappaqua”. I believe the lead film is “The Man From Uncle”, mid-60s.

I have a clear screen capture of the marquee shot and it is 2 Man from UNCLE films…THE SPY WITH MY FACE and TO TRAP A SPY.

1972 photo added via Photographs From The 1970s Facebook page.

*not noted in the detailed intro is that the Chandler Theater opened as a movie palace not a legitimate theater. its first film was the 1914 Italian epic Anthony and Cleopatra.

*also I’m assuming the reason the theater was razed rather renovated was that no one wanted to spend the $$$ needed rather than that the theater
in such condition renovation was impossible.

Big Joe, there must have some other reason than condition as to why it was not renovated and repurposed. The Harris was in very decent shape compared to most of the other theatres on the block as it was one of the last to remain open and showing current films into the early ‘90’s.

The Harris and the Selwyn were my two favorite houses on the block, although I did have a soft spot for the faded opulence of the New Amsterdam.

I’m grateful that two out of the three are up and running and in magnificent shape.

I thank Ed S. and mike saps for their replies. as with the Candler Theater I’m guessing the Lyric and the Apollo on the north side of the street though razed were likewise in perfectly decent shape for renovation.

bigjoe59. I can’t speak for Lyric but the Apollo again saw life as a Broadway playhouse for a time with the opening show being On Golden Pond. I don’t remember the extent of the renovation but I do recall when the renovation was in progress observing a woman recovering seats in the orchestra. And there was a rich new curtain.

And I continue to say the Lyric and Apollo were not demolished. The 42nd and 43rd street walls still stand, which is good because the 43rd street side of the Lyric is ornate.

The Apollo also operated for a while as the concert venue known as The Academy into the mid ‘90’s. The entrance to the Academy was through the 43rd street exit doors, so one walked pretty much directly into the auditorium. When I saw Santana play there around ‘94 or so, there were no seats in the orchestra, which was leveled for general admission standing room. However, the HBO show Russel Simmons Def Comedy Jam was taped there, and I seem to recall shots of the crowd in their seats. In any event, the house was in pretty good shape, as I recall. The Lyric was probably in reasonable shape as well, since it remained to the end one of the classier first run oriented theaters on the block, like the Selwyn and Harris.

The lobby on the 43rd Street side wasn’t even 8 feet deep.