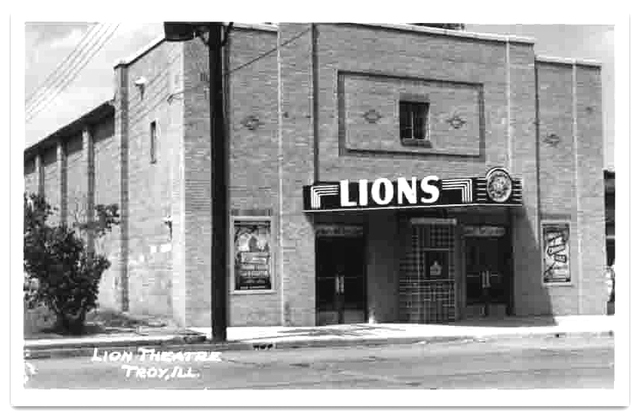 An angry Lion writes to the Troy Tribune in March 1957:

The regular meeting of the Troy Lions Club was held in the basement of the Evangelical Church, March 5, 1957. A very good dinner was served, after which a very important business session was held.

The very first thing on the agenda was to officially install Mr. Elmer Eckert into the Lions Club as a member. Lion Shaffer had the honor of performing this installation. We welcome Elmer and we know he will be an asset to the club.

The last business on the agenda was the Lions' Theater. A problem now exists at the theater which concerns not only the Lions Club in Troy but the surrounding areas. Some time ago I included in the Lions News a plea for more attendance at the Lions Theater. Perhaps no one read it or maybe this article was overlooked. I do not know. It leads me to believe that no one cares if the Theater operates or not. I hope I am wrong.

Due to low attendance the Lions Theater is in financial difficulty which leads to no other alternative but to close the theater. So as of March 17, 1957 the Lions Theater will close its doors. The theater is very much in debt. It has been running in the red for the past six months and has a large insurance bill coming due, as well as the taxes in May which amount to over seven hundred dollars.

Although the doors are closed, we have faith that the people do not want to see this recreation spot closed and will have a reaction that will be overwhelming for the support of this theater.

We would like to ask this one question in summarizing this up, DO YOU WANT A SHOW IN TROY? If you do, would you please send a donation now to the Lions Theater, to put it on its feet again so it can be reopened in the very near future. If by any chance there is no response to this plea, the theater will immediately be sold or put up for lease. Don’t let this happen, I beg of you. Let’s get behind the theater. The future of the theater depends on what you the people want. Send all donations to Lions Theater, in care of Dale Kurtz, 102 West Henderson in Troy.

The Lions Theater will reopen Friday, April 26. The Lions Club committee has worked out a way to again have the show in operation and asks all area residents to attend as often as possible to give it the support it needs.

New admission charges are being made: adults, 60c and children, 25c. Advance tickets are now being sold at 10 adult tickets for $5.00. This is a saving of $1.00 and two children ‘will be admitted on one adult ticket. The tickets are good for any show night in the near future. The program starting April 26 will be in the next week’s Tribune.

There’s more to the story.

As a movie house the theatre closed in 1960. The Lions Club sold the structure which was then converted into a bowling alley. This emporium lasted until January 1981 when it was destroyed by fire.

The address was 120 East Market Street.

Possibly from the 1950s-60s a photo postcard view of the Lions Theater in Troy.