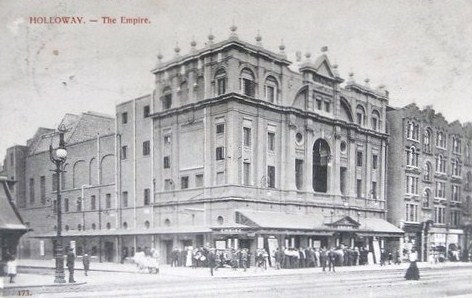 Located in the inner north London district of Holloway, on the corner of Holloway Road and Manor Gardens. The Holloway Empire & Palace Theatre was opened on 4th December 1899. It was built for Oswald Stoll and was part of the Moss Empires Ltd. chain of variety theatres. Designed by noted theatre architect W.G.R. Sprague, the seating was arranged for 260 in the orchestra stalls, 49 in the fautilles, 175 in the pit stalls, 260 in the dress circle, 450 in the gallery and boxes which had a total of 16 seats. The stage was 65 feet wide and 35 feet deep.

Soon re-named Empire Theatre of Varieties, films were first shown on 6th January 1902, when the Bioscope was the last act on the variety bill. Charlie Chaplin appeared on stage in August 1906 and again in May 1907. From November 1923, it had become part of the Biocolour Picture Theatres chain and converted to full time cinema use. From November 1926 Biocolour were taken over by the Gaumont British Theatres chain. It was equipped for sound films in 1930.

Gaumont Theatres closed the Empire Theatre at the end of August 1938, as their new 3,006 seat Gaumont Theatre opened just a few yards away on the other side of Holloway Road in September 1938.

The Empire Theatre was used as a warehouse for a while and was demolished in 1953. An office block was built on the site that was occupied by the Inner London Education Authority(ILEA), which in 2008 was standing vacant. By 2020 it had been re-named Bloomfield Court, used for student accommodation.