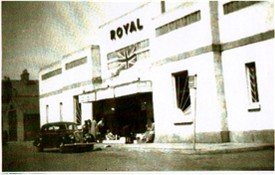 Located in Amlwch, Anglesey, North Wales. A white painted building that gave the impression of being of some importance. The Cinema was operating prior to 1927 with 600 seats. It was remodeled in 1938 and was re-named Royal Cinema.

By 1954 a CinemaScope screen had been fitted, the proscenium was listed at 29 feet wide. It was closed in the 1970’s. It became a nightclub and has since been demolished, with housing built on the site.

The owner of this cinema in the 1960s was a Mr.Morgan. He also did most of the projecting.
During the 1970s building was given over to the Dragonbeat night club and later to Wheelers night club.
The building then became a Kwiksave store. After Kwiksave was taken over by Somerfield the store was renamed as such.

This venue opened circa 1924 under the ownership of Messrs C.W. & F.L. Johnson as “The Cinema”, seating 600 patrons with prices 5d to 1/3d. It ran on one show per night with 2 changes of programme per week.

By the 1930’s a Mr. T.J. Jones of Llangefni had taken ownership and had introduced Saturday matinees and a Kaylee sound system. Prices were now 9d to 1/6d.

Mysteriously seating is given as only 380 seats in 1951 from the 600 originally. But no explanation can be found for this. The ownership was now with a company known as Royal Cinema (Amlwch) Ltd. Programmes were nopw changed 3 times a week and prices were 1/9d to 2/3d.

Cinemascope was introduced in 1955 onan 27 feet wide screen in the 29ft wide proscenium. It appears that seating rose to 298 seats with tis installation, perhaps if true the only case of a cinema gaining seats with the coming of Cinemascope! Prices were now 2/– to 4/–.

The final fate of the cinema is correctly given in the first added comment.