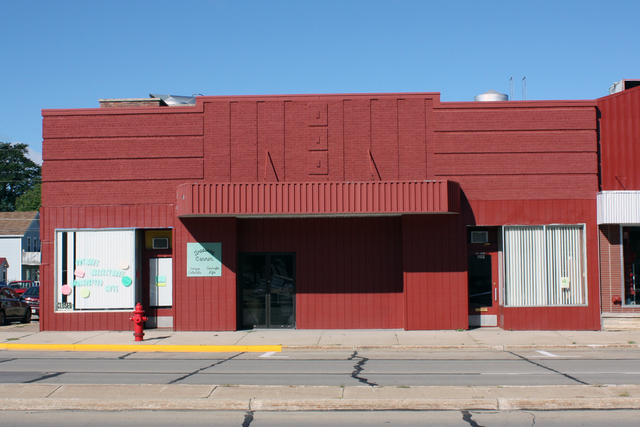 S&M Theatres, operators of the Tomah Theatre, opened the Erwin Theatre in 1947, according to Boxoffice of May 27 that year. Construction of the house had begun in 1945 but suffered delays. The original seating capacity was 632. The caption of a photo of the front of the Erwin described the building: “…concrete sidewalls, and ornamental brick front, designed along highly modern lines inside and out…. Elaborately decorated, the lobby displays rich pile carpets, as well as notable lighting effects.”

S&M Theatres, earlier called Marcus & Swirnoff Theatres Inc., had been planning a new theater in Tomah since at least 1942, when Boxoffice of April 18 announced the chain’s intention to build an 800-seat house there, tentatively called the Camp Theatre.

The S&M chain, headed by Ben Marcus, became Marcus Theatres, which is now one of the larger theater chains in the U.S., operating more than 600 screens in the Midwest, including a theater in Tomah, the six-screen Ho-Chunk Cinema, opened in 2004.

The Tomah Theatre was mentioned in Movie Age as early as 1929, when Vitaphone sound equipment was installed in the house.

The name Gasoline Alley was given to Superior Avenue in honor of Tomah native Frank King, whose comic strip of that name ran in some 300 American newspapers for several decades. This is noted on this page at the city’s official web site.

May 1988 photo added credit Bryan Meyer. Just prior to closing.