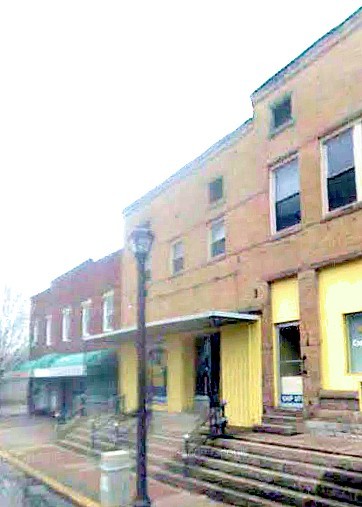 The Mills Theater dates back to at least 1940 and operated into the 1950’s or later. The building is located in the 100 block of East Main Street and is used as a bookstore.

Warren Schafer, operator of the Trail Theatre in Morehead, operated the Cozy for about two months in 1939 before selling it to Mills, then bought the Mills Theatre from Mills early in 1944. I don’t find the Cozy mentioned after 1939 or the Mills mentioned before 1942. They were probably the same theater. In 1948, Schafer sold both houses to Chakeres Theatres.

A July 15, 1939, Boxoffice item said that all three of the theaters in Morehead had escaped damage from recent flooding. Though none of the theater names were given in the item, the third theater must have been the Morehead College Theatre, which a 1935 Boxoffice item said was operated as a regular movie theater, open to the public, operated in the school’s auditorium by a professor.

This 1935 item also mentions a “…defunct Blue Eagle….” in Morehead, whose operator had unsuccessfully sued the college to prevent it from competing with has privately-owned theater. By the early 1940s Boxoffice was saying there were two theaters in Morehead, so the College operation, last mentioned by name in the magazine in 1938, must have shut down by then.

The most recent mention of the Mills I’ve found in Boxoffice is in the December 15, 1952, issue, when Chakeres Theatres announced plans for a new drive-in at Morehead. The Trail, a 400-seat house opened by Schafer in 1937, is mentioned as late as 1954, when CinemaScope was installed.

This was the cozy then the Mills theater. It was open until the early 60’s.