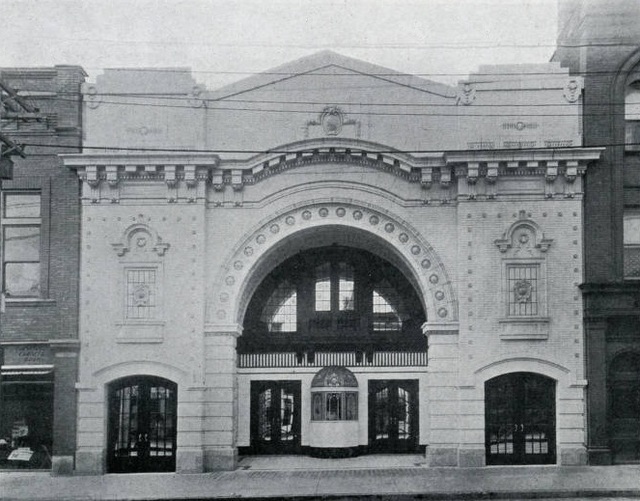 Thanks for the info.

if the Pythian Theatre ever showed movies, can you enter it into CinemaTreasures?

I have an address for the CAMEO theatre as 1060 Mt. Vernon Avenue. The 1949 picture noted above looks to be facing east at approximately the corner of Mt. Vernon and 20th Street.

Here is a photo of the interior of the Vernon Theatre from the magazine Popular Mechanics, June, 1926.

1955 must have been the year the name was changed. Boxoffice of March 19 that year said that CinemaScope had been installed at the Cameo in Columbus, making it the last theater in the J. Real Neth circuit to be modernized.

When did it close and why?

The CAMEO closed on 9/26/1962, with its final features being ATLANTIS LOST CONTINENT & SADDLE THE WIND.

The Vernon Theatre was originally a project of the Dusenbury brothers. This item is from the February 7, 1914, issue of Motography:

“J. W. Dusenbury has taken out a building permit for the erection of a moving picture theater on Mount Vernon avenue, near Twentieth street, Columbus, to cost $30,000.”

A follow-up item appeared in the May 2 issue of the same publication:

“The new picture theater built by the Messrs. Dusenbury in Mt. Vernon avenue, Columbus, is now nearing completion and will be opened to the public shortly. It will be called the Vernon. Its capacity is 1,000.”

An early report on the project appeared in the September 13, 1913, issue of The American Contractor:

Dawson & Holbrook also designed the downtown Columbus house that was long known as the Knickerbocker Theatre, and might have planned the conversion of the old Grand Opera House on State Street into a movie theater around 1914.