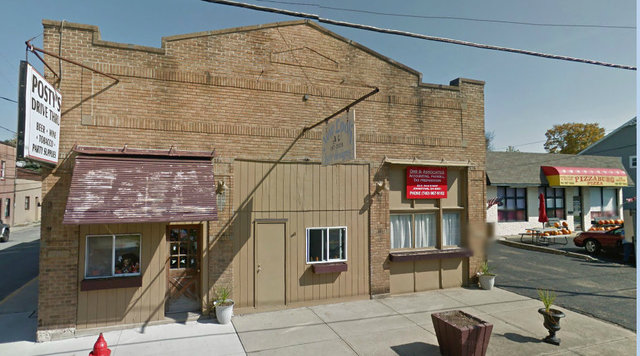 It last operated in the 1970’s as the Johnstown Theater and Johnstown Cinema The building still stands.

Next door to Longbranch Pizza. The old theater has a Pepsi sign outside, and an American flag mounted outside, in the Google Street view. Can’t located what is at that address.

The Dorsey was last known as the Johnstown Cinema, but I don’t know how long it operated under that name.

Boxoffice of May 15, 1972, reported that Charles Evans and Ed Cheatwood were updating the Dorsey Theatre and would reopen sometime in June. They had not yet decided whether or not to keep the old name.

The June 19, 1972, issue of Boxoffice said that the Johnstown Theatre at Johnstown, Ohio, had been opened Friday, June 2, after having been closed for a decade.

The February 18, 1974, issue of Boxoffice reported the sale of the Johnstown Cinema to Wes Matheny. The item was repeated in the March 4 issue, and after that I can’t find the theater mentioned ever again.

I remember attending a screening of “The Ghost And Mr. Chicken” at this theater sometime in 1972. We lived in Utica at the time, and we had come to see “Batman” but the schedules had been reversed. They stopped the film halfway through for a 15 minute intermission, which I’d never seen before, but I was about 10 or so…never went back, but it was pretty nice little theater.

Must have been a re-release because I am sure Both films were released in the 60’s.

I know, I can hear my wife now…“Honey, What’s a kiddie matinee?” Arrrggggghhh…