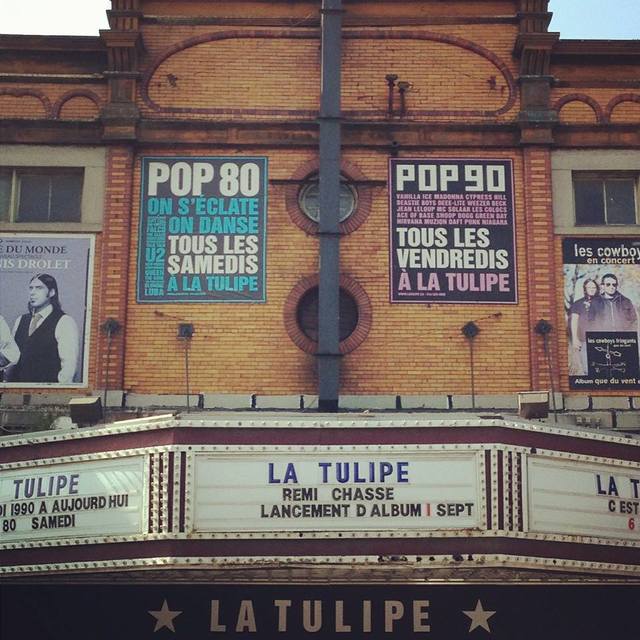 Opened in 1913, the 1,500-seat Dominion Theatre stopped showing movies in 1960 and was rented out to the Jehovah’s Witnesses by Confederated Amusements. In 1967 the comedian Gilles Latulippe bought the Dominion Theatre and renamed it the Theatre des Varietes.

The Dominion Theatre was created by the architect Joseph-Arthur Godin (1879-1949) and built in 1913. On the original drawing, it was named Le Jovial but the name was never retained. It opened in April 1914 and was able to greet 1500 spectators. It was first a silent movie theatre at the beginning and it switched to talking movies in 1929. Then with the golden age of the burlesk, presentations varied from movies to live shows since 1932 until the late 50’s. Then it became again just a movie theatre until around 1965.

The building was then rented to the Jehovas Witnesses for a while and is listed in the phone book of the time as the “Emmanuel Church”. In 1967, Gilles Latulippe finally bought it and returned it to its root of movies and live burlesker shows. Under the name “ThÃ©Ã¢tre des VariÃ©tÃ©s”, it will be filled by laughter until it’s closure in 2000.

It was renamed “ThÃ©Ã¢tre des NouveautÃ©s” afterward, but was closed within the same year. It’s now a cabaret named “La Tulipe” and it has gone under a lots of transformation. Noticeably, all the seats of the orchestra were removed. Only the balcony remains untouched. You can see current pictures of the interior on their site :(http://www.latulipe.ca/latulipe/visite/latulipe_visite.asp)

The number of spectators varied over the years. In 1914, it was announced at 1500, but in 1926 it was down to 908. In 1928, after new safety laws were implemented following the deadly fire at the Laurier Palace (which killed 78 kids), the number of seats was 829. Under Latulippe’s direction, the VariÃ©tÃ©s had 727 seats. The cabaret now claims 550 seated or 700 standing places.

You can see pictures on my website (in French) dedicated to this beloved theater at:
http://pattypatwebdesign.net/varietes/index.html