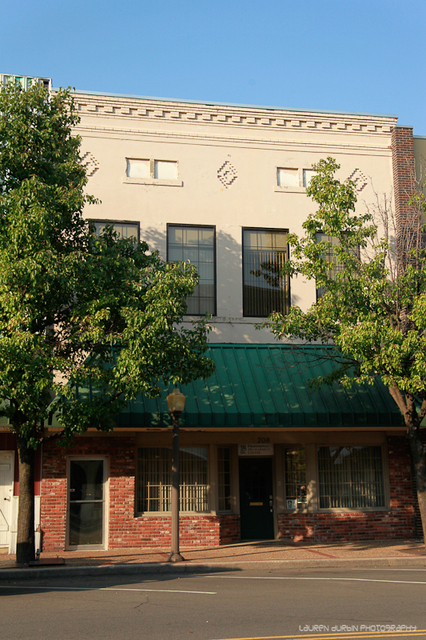 The Yale Electric Theatre opened on January 29, 1908 with seating given at 420. In 1911 the New Yale Theatre opened and the Yale Electric Theatre was closed and became a pool hall. In July 1915 it was remodeled and reopened as the Yale Theatre its later years it was operated by Rowley United Theatres until it closed on October 3, 1936 with John Wayne in King of the Pecos".

Courtesy of ken mc, here is a 1921 newspaper ad for the Yale Theatre –
View link

L.W. Brophy opened his first Yale Theatre in Muskogee in 1908, according to this source (scroll down to section headed “pgs 118-120”) which goes on to say that he built a new Yale in 1910. It says that the second Yale seated 1000, though, and the building at 208 W. Broadway today, though it looks to date from the 1910s, doesn’t look big enough to have housed a theater that large, so I don’t know if it’s the same one or not.

Google Maps puts the pin icon for this theater about three blocks south of the actual location, on a different street. I’ve moved Street View to the correct location, the north side of Broadway a few doors west of 2nd Street.

An ad in the October 5, 1916, issue of the Muskogee County Democrat places the New Yale Theatre at Broadway and Third. That explains why the building at 208 Broadway looks too small to have held a 1,000-seat theater. It didn’t.

Either the New Yale Theatre isn’t listed at Cinema Treasures or its name was changed and it is listed under the later name, but is missing the AKA. I wonder if it could have become the Palace, which is listed here but without an address? The Palace was advertised as early as 1921, and I haven’t found any mentions of the New Yale later than 1919.

The Yale Electric Theatre launched in the Ayres Building at 208 Broadway Street on January 29, 1908 with Edison motion pictures and a mirrored screen. It showed three reels of movies followed by a vaudeville show. Its name was shorted to the Yale Theatre. The audience demand was greater than the Yale’s size as people loved the movies and the larger, New Yale opened on September 16, 1911. The New Yale took advantage of the new Surety Building skyscraper location one block away from the previous location.

The previous Yale Theatre which had been dormant was put back into operation a third time at 208 Broadway as a discounted sub-run location. Meanwhile, the Palace converted to sound under Robb & Rowley to stay current in 1928. R&R would also purchase the Broadway and Yale theaters converted each to sound. There appear to be no further listings for the Yale following an October 3, 1936 showing of John Wayne in “King of the Pecos.”

A third address for a Yale Theatre turns up in the 1914-1915 American Motion Picture Directory, which lists the Yale Theatre, 200 N. 2nd Street.