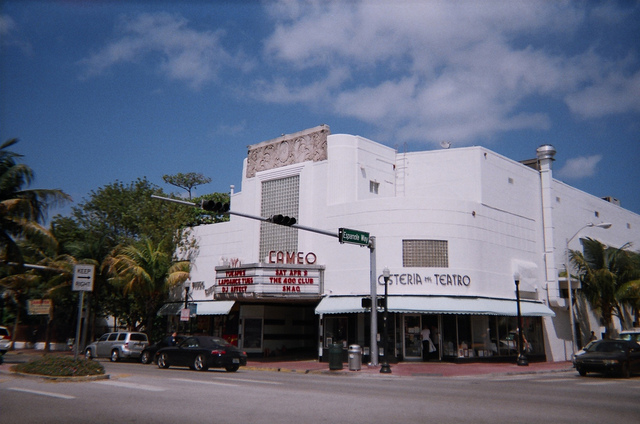 The Cameo Theatre, a Miami Beach landmark and gem of Art Deco architecture, designed by Robert E. Collins was opened on November 4, 1938 with Will Fyffe in “To the Victor” & Isla Miranda in “The Lie of Nina Petrovna”. It has been transformed into a Crobar nightclub, sister to those in New York, Chicago, Hollywood and Buenos Aires.

This theater was a favorite subject of painter Davis Cone, and appears several times in the book, “Popcorn Palaces”.

Here is another night photo:
http://tinyurl.com/yyqh8hp

A recent photo of the Cameo Theater.
View link

Is this a strip club now. It certainly isn’t CroBar. I saw a sign advertising lapdances outside. Very sad.

This very deceptive ad, that promotes “THE DIARY OF ANNE FRANK” as light comedy, was the Cameo’s only Roadshow attraction. According to Variety, it was also one of the few successful runs for “Anne Frank” outside of new York.

The July 5, 1938, issue of The Film Daily ran this item about the proposed theater at Washington Avenue and Española Way:

“Miami Beach— New $100,000 theater to be erected here by Herman Weingarten, prexy of the W. G. Operating Co., will be ready for the 1938-39 winter season, it is announced. Thirty-six year lease on a site at Espanola Way and Washington Ave. has been closed.

“Paul Greenbaum of New York City, associated with Weingarten for the last 20 years in the construction of theaters in New York, Brooklyn and Long Island, will have charge of construction work. Robert Collins is architect.

“The building will have a large entrance on Washington Ave. and a roomy balcony and open smoking loge. The latest type of construction and air conditioning will be utilized.”

I don’t know how this has not already been linked, as the article was published on September 9, 1999, but Cameo Role, from the Miami New Times, gives a history of the theater from its opening through the halcyon days when it was one of the region’s leading live music venues in the 1980s and 1990s. Unfortunately, the 9-photo slide show (click on the image at the top of the article) consists mostly of small pictures from the Cameo’s 1980s punk rock era, with only four shots with the theater itself, and those only showing the marquee.

I think all the Crobars are closed now. Nature of the business I suppose. Clubs always need to be new.

When Richard Shelter moved his shows from the Ocean 71 hotel on Collins Avenue and 71st (nee Flynn’s), he switched to the Cameo as his primary venue in the mid 1980s. While Shelter would move on to LA, his brief one year stint promoting the venue as a punk and alternative music scene would ultimately take hold and end its run as a movie house by the latter part of the 1980s. But prior to this, the Cameo in the 70s and early 80s was known for surf movies, B-movie fare and 99 cent triple bill Kung Fu extravaganzas.

The Cameo theatre opened on November 4th, 1938 with “To the Victor” and “The Lie of Nina Petrovna”. Grand opening ad posted.