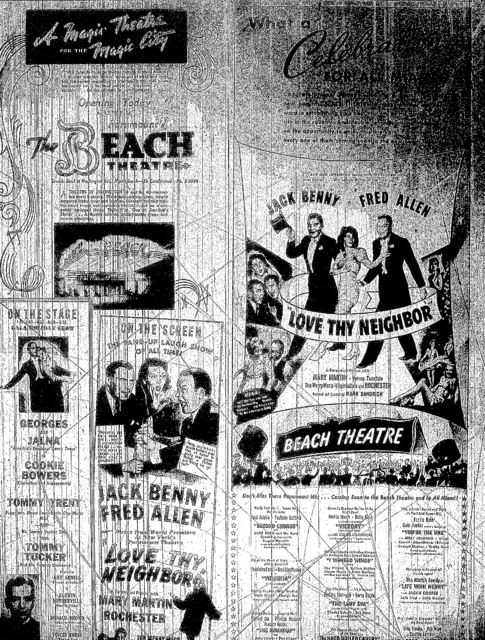 The Beach Theatre was opened on December 25, 1940 with Jack Benny in “Love Thy Neighbor” plus a stage show. Built for Moses Ginsberg and Paramount Pictures Inc., this fantastic Streamline Art Moderne movie palace cost over $300,000 to construct.

It was designed by the firm of Weed & Reeder with Frank H. Shuflin, and with Hal Periera as associate architect and Robert Law Weed doing most of the interior design, which was an eclectic mix of tropical themes and Streamline Moderne.

The Beach Theatre was home to a nightclub in the late-1980’s, long after the theater had closed. After the nightclub closed, the lobby space was partitioned and converted into a bank and retail use.

In September 2007, it was annnounced that the former Beach Theatre would be converted into an upscale TAO restaurant (which also has locations in New York City and Las Vegas), but this never happened.

Just passed through Lincoln Road and I can confirm that there is no Tao, but I also didn’t recall seeing any evidence of the Beach theater either. I’m going to try to swing by there again tomorrow to check it out. What a shame as this appears to have been a stunning theater very “Miami” in design. Has the Auditorium been gutted or is it still there? Do anyone know?

The architect and firm fields for this page don’t match up with most other sources. The caption pages for the Gottscho-Schleisner photos of the Beach Theatre at the Library of Congress (see my previous comment) say that Pereira & Pereira acted as design consultants on the project, but the architects were Weed & Reeder. There’s no mention of Albert Anis.

The Pacific Coast Architecture Database page for Hal (not Percival) Pereira lists him as a consultant to Weed & Reeder on the Beach Theatre project, and cites an article from The Architectural Record, August, 1941, as the source. It is possible that William Pereira was not involved in the project. Although the firm of Pereira & Pereira was not formally dissolved until 1943 (according to the AIA’s Directory of American Architects), William appears to have been very busy in Los Angeles in the early 1940s.

The entry for architect Frank H. Shuflin in the 1956 edition of the AIA’s Directory of American Architects lists the Beach Theatre in Miami Beach as one of his principal works. It lists Shuflin’s positions at the firm of Weed & Reeder as draftsman from 1927 to 1934, and Associate in charge of the office from 1935 to 1941. I’m not sure if that means he was the lead architect on the Beach Theatre or not.

A questionnaire sent to the AIA from architect Edwin T. Reeder in 1946 also lists the Beach Theatre as one of his works. Reeder left the partnership with Robert Law Reed in 1941 and established his own practice, so the Beach must have been one of their last projects together.

Percival Pereira was not connected with the design of this theater. The principals of the firm of Pereira & Pereira were William Pereira and Hal Pereira.

Have walked through the Lincoln rd Beach Theatre. It is completely gutted. nothing is left.

What about the lobby?

it has been partitioned away from the theatre, and a large cement wall now covers the original hallway between the lobby and theatre. the large stairwell pictured above no longer exists and getting to the mezzanine from the bottom floor is now impossible. The actually theatre has been closed off on all sides. Every door sealed from the outside with concrete and drywall on the inside. There is now only one small door to get into the theatre area. if you look closely in the photo above. you can see the old bay doors on the far wall are covered with large cement blocks.

Thank you. What a shame. 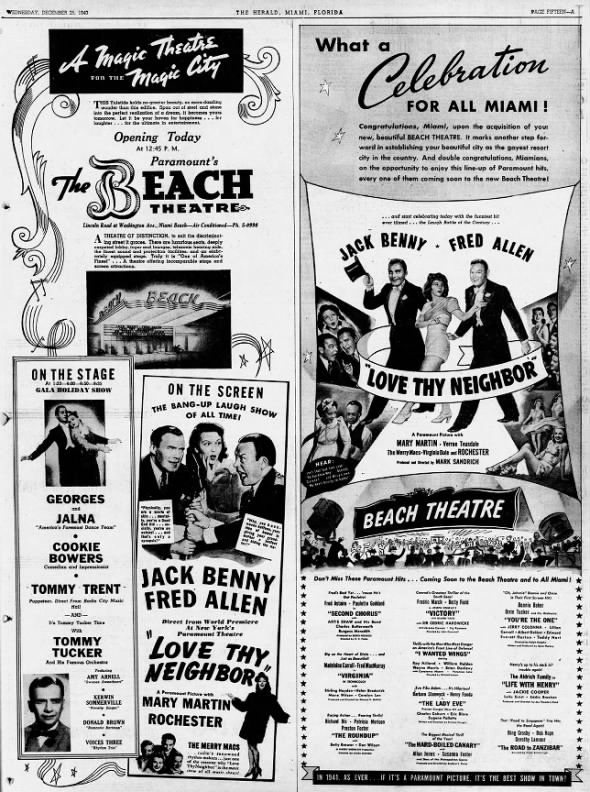