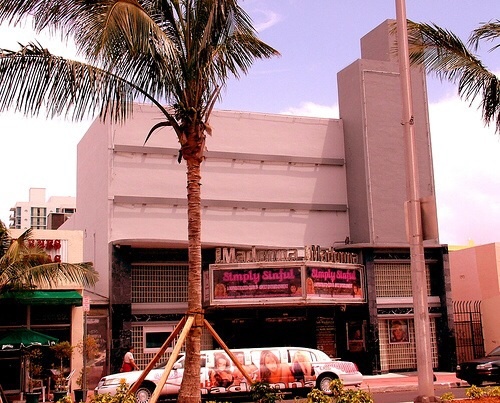 In 1994 it was converted into an adult striptease club.

The Gayety was at 2004 Collins and was mostly a Burlesque strip club that rarely showed movies.

When I was going to Ida M. Fisher Junior High in the mid-1960’s, the building that houses the Roxy was a fire insurance company office. If memory serves me correctly – and I can’t prove this… I believe the insurance company relocated because THEY had a fire!

This is a recent photo of the former Roxy, now Club Madonna which is a strip club.

The last film I saw at this theatre was “A Man For All Seasons,” that being the 1966 film. I was dragged there by history-loving parents for a family afternoon, and steamed the whole time. It was not exactly the kind of film an 8 YO wanted to see. There was no vestibule for the two aisles, so every time someone used the door, it wiped out half the screen. The doors faced West and caught all the sunlight from the very small lobby.

From the late 70’s into the late 80s, it was a classic grindhouse theatre. I saw tons of slasher / horror movies there, including Scanners, The Howling, Fear No Evil, Texas Chainsaw Massacre, Prom Night, Halloween 1-3, April Fools day and many others. My most memorable time at the Roxy was seeing The Warriors with a pretty rowdy audience in late 81. When the film ended and i was leaving, a number of Guardian Angels were standing in the back of the theatre looking like they could’ve been in the film itself.

The Roxy during the ‘72 DNC era. A blue movie parody of the “The Prime of Miss Jean Brodie” entitled “Miss Bodie” can be seen on the marquee. The Roxy would flip back to regular fare by the late 70s.