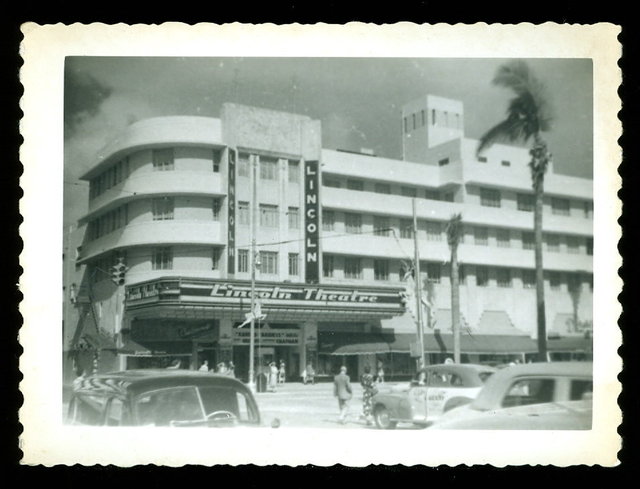 Designed by famed theater architect Thomas W. Lamb in association with Robert E. Collins, who designed the nearby Cameo Theatre, now a nightclub, the Lincoln opened in 1936. A jewel of Art Deco architecture, with its sleek, curving shapes and intricate stylized floral reliefs on its coral-pink facade and elegantly appointed interior, the Lincoln was host to many Miami movie premieres in its long history as a movie house, but finally closed in the early 80s.

After sitting vacant for several years, the building was leased in 1988 by the New World Symphony, which was founded a year earlier by Michael Tilson Thomas. The organization was created to further develop gifted musicians for positions on orchestras all around the world.

In 1990, the NWS purchased the Lincoln outright and began a nearly million-dollar renovation and restoration project.

Though the exterior was restored to its original appearance, including its elaborate marquees and graceful facade, the interior was completely gutted and rebuilt. Now seating 713 in spacious, comfortable chairs, the auditorium contains a stage with over 2000 square feet of space, clear sightlines and near-perfect acoustics.

Practice rooms and administrative offices take up the second, third and fourth floors of the building. Host to classical concerts, including ensemble and chamber programs, the Lincoln is one of the best venues in South Florida to hear classical music, as well as the occasional dance or world music performance, in a comfortable, modern and at the same time, historic location.

There are some urban lends about the Miami Beach Lincoln Theater. Did Ben Hur premiere her in 1960? Was there a wagon/chariot wheel in the lobby to commemorate that event? On the comment above, I would suggest a slight change: the Lincoln Theater (541 Lincoln Road) was open as late as 1986 when I went to a movie there, but I would be intersted in any help in finding documentation on the closing date.

Jeff, Brandt closed it in 1970. It re-opened in 1972 as a discount house with occasional first-runs and ran until the summer of 1987. It later re-opened as a performing arts center with movie facilities.

“Ben-Hur” premiered here in 1959 and again for the 1969 roadshow re-release. I can’t help with the wagon wheel.

The January 15th, 1936 grand opening ad had been posted here.

When was Lincoln Road malled? Sometime in the 1960s, right? But which year?

Information above should be changed to closed renovating. When I was in Miami BEach in MArch the theater had closed.

I remember always trying to sneak upstairs to the balcony which was usually roped off. Always had excellent double features for a good price. Went there whenever the Roxy wasn’t showing anything good. The last time probably in 1984.

The Lincoln Theater closed several years ago and became an H&M clothing store in 2012. (I believe I remember hearing of objections by preservationists that did not prevail… though after the transformation some people were pleased with what was preserved.)

The New World Symphony moved behind the Lincoln into the newly constructed New World Center (across 17th Street from the Fillmore at the Jackie Gleason Theater) which opened in January of 2011. Click here (the same official link under “Related Websites” above) for info and the Wikipedia page.

The parking lot that had been at the corner of Washington Avenue and 17th Street was removed and turned into Soundscape Park. “Wallcasts” of concerts going on inside the New World Center and movies in the Soundscape Cinema Series are presented to outdoor audiences free of charge via large projectors in the park aimed at the “projection wall” on the east side of the New World Center building. (Nice overhead shot of projection wall.)

Still it would have been nice to have been able to visit the Lincoln when it was a cinema. … A friend of mine told me his parents took him to see “Beverly Hills Cop” there in the 80’s. … I remember seeing news reports of the premiere of the “Miami Vice” (2006) movie with stars in attendance, apparently using the projection capability the theater still had though it was the home of the symphony.

Now when I’m in the area I enjoy sitting in the front windows of the Starbucks next to what had been the Lincoln, watching the parade of pedestrians on Lincoln Road Mall. (Another kind of “motion picture”? … Don’t take my seat, okay? … Only kidding…)

I like the way the current description of the Lincoln in its overview here on Cinema Treasures reads from the time when it still housed the symphony so part of me wants to say “Don’t change or update it due to my post“, except to change it from “open“ to “closed“.

List of articles with photos regarding the Lincoln in its transition to H&M.

Including: “Look At The Guts Of Lincoln Theatre, Revealed And Preserved”

And: “Giant LED Screen! This Is The Inside Of Miami’s New H&M”

Another article about the history, transformation, preservation and architects:
“Art-Deco-Meets-HM”