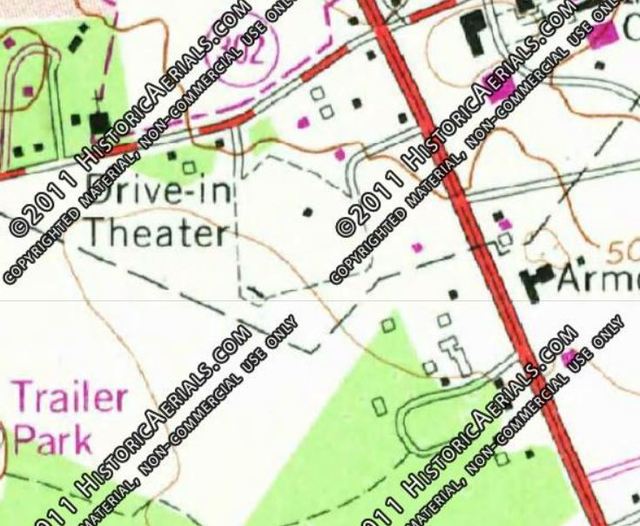 The Friendly Drive-In in Aiken was a location that didn’t last long. Did these owners think Aiken could support so many screens? Granted, the bomb plant was in full swing, but so many drive-ins!

The friendly Drive-In was located on Whiskey Road almost to New Ellenton, S.C. It was one of the few drive-ins in the Augusta area that I never went to!

It was a pretty good size lot initially parking 200 cars and was opened March 1, 1951 by Billy King. For the 1952 season it was renamed Tower Drive-In. By around 1953-1954 it was owned by Consolidated Theatres and the car capacity had increased to 400. Consolidated was located in Charlotte, NC.

Bill was right while the Bomb plant was in full swing; Drive ins sprang up everywhere in Aiken County.Only to have a short life span.

Oak Ridge,Tenn. probably had the same expansion of screens in the 50’s.Both Cities built the A-Bomb.

This one was just in from the southwest corner of Whiskey and Pine Log Roads. It’s been obliterated by modern retail.

Thanks Andy,Sorry it took so long to read this,I will pass the info on to Bill.

Both the Fox Drive-In and the Tower Drive-In are indicated at the same location on CT, Whiskey Road at Pine Log Rd.

Were these the same drive-in, or were they individual drive-ins at different locations? Can any locals clear this up?

The Tower Drive-In is listed in the 1952 edition of Theatre Catalog with 200 car capacity operated by Billy King. The Aitkin Drive-In is also listed but no mention of a Fox Drive-In.

In the 1953-1954 edition of Theatre Catalog the Tower Drive-In (now 400 cars( and the Fox Drive-In (600 cars) are listed as being operated by Consolidated Theatre out of Charlotte, NC.

thanxs for the info..