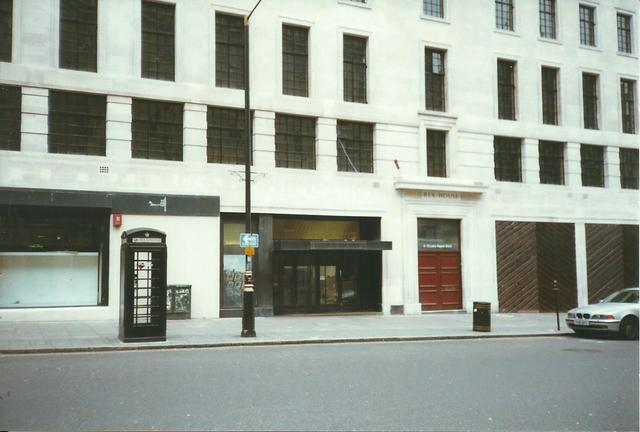 Located in the West End district of central London, south of Piccadilly Circus, on Lower Regent Street. The Paris Cinema was in the basement of an office building named Rex House, and the entire building was designed by noted cinema architect Robert Cromie. The Paris Cinema opened on 20th April 1939 with Jean Renoir’s "La Bete Humaine". It continued screening Continental (usually French) feature films for a while, then went over to screening revivals of English speaking films.

Externally, there was no canopy over the entrance which was adjacent to the entrance to Rex House on its northern side. A doorway led into a small foyer, with stairs down to the auditorium. Seating was provided on a single floor. The plain Art Moderne styled decoration, was broken only by ribs in the ceiling, which contained concealed lighting and a back-lit alcove on each side of the proscenium.

The Paris Cinema was closed in late-November 1939, due to war-time conditions. It re-opened on 1st February 1940, but was open on an irregular basis, being used only for Trade Shows by the Summer of 1940. Its short life as a cinema came to an end when it was requisitioned by the Government Office of Works in September 1940.

After World War II ended, it became a radio studio for the BBC, known as the BBC Paris Studios. Many comedy programmes which required a live audience were broadcast ‘live’ from the Paris Studios, including ‘Im Sorry I haven’t a Clue’ and the radio series of ‘Dad’s Army’. It was also was used for recording pop artists, with a live audience. Among those who played at the Paris Studios were AC/DC, The Beatles, David Bowie, Family, Jeff Beck, Deep Purple, Dr Feelgood, Fleetwood Mac, Genesis, Led Zeppelin, Joni Mitchell, Pink Floyd, Rod Stewart and Simple Minds.

The BBC vacated the buildings' former cinema space in April 1995. It then lay unused for several years, until the mid-2000’s, when it was converted into a LA Fitness gym.

No! No Cinema should ever be turned into an L.A. Fitness……..

A vintage photograph of the Paris Cinema in 1939:
View link

a now and then comparrison, you can see the filler where the signage was attached
http://www.flickr.com/photos/woody1969/4301928136/

Exterior features in the opening of “The Twenty Questions murder mystery” (1949) with a panning shot of Lower Regent Street showing people queuing for a recording of “20 Questions” (a popular radio programme of its day). Bomb damage visible in surrounding buildings – cinema has boarded up windows. Interior is studio set bearing no relation to the genuine article.

Agreed that no cinema should be converted into a L.A. Fitness. Horrible. I would give my first born for any photos or media of any kind of the BBC Paris Theater with regards to Led Zeppelin and the concert they played there on 1 April 1971. To date, not a single photo exists of the band performing at the Paris Theater, not backstage, nor before or after the show. I find this hard to understand why this is the case.