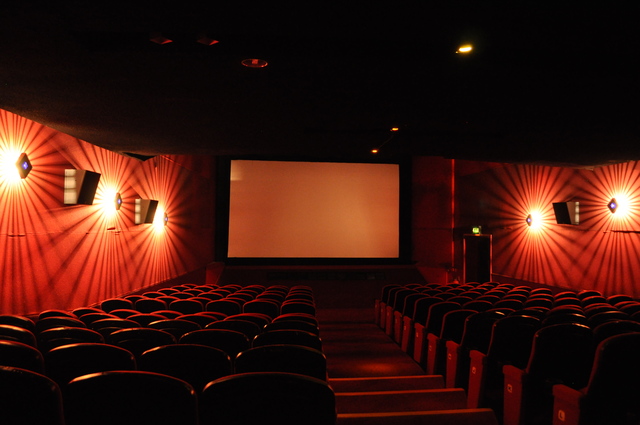 Designed for either film or stage use by Adolph Zukor’s Paramount Pictures Inc., it was envisaged as a smaller version of their Plaza Theatre in nearby Lower Regent Street, also designed for Paramount Pictures Inc. by architectural firm Verity & Beverley. The Carlton Theatre opened on 27th April 1927 with a musical play “Lady Luck” starring Leslie Henson which ran for 324 performances. This was followed by a musical comedy drama “The Yellow Mask” by Edgar Wallace which transferred to His Majesty’s Theatre along the Haymarket. The next production was the American college life musical “Good News”. After this closed the Carlton Theatre screened its first film when, on 26th March 1928 “Wings” starring Clara Bow & Charles ‘Buddy’ Rogers had its UK premiere run of four months. Returning to stage shows, a revue “In Other Words” starred George Robey at the end of 1928 and the last stage show to play at the Carlton Theatre was “Merry Merry” starring Peggy O'Neil which opened in February 1929 and later transferred to the Lyceum Theatre.

Seating was provided for a total capacity of 1,159 in stalls (which were below street level), a small mezzanine Royal circle at street level and a large upper balcony. There were boxes containing seating each side of the proscenium opening. The proscenium was 42 feet wide, the stage was 45 feet deep and there were 14 dressing rooms.

The Carlton Theatre was wired for sound in 1929 and went over to become a full-time cinema. The first regular film to be screened was Chester Morris in “The Perfect Alibi”(aka-“Alibi”). Paramount Pictures Inc. took over the Carlton Theatre fully in 1930.

On 1st March 1954 it was taken over by 20th Century-Fox and became the West End showcase cinema for their CinemaScope productions, opening with the UK premiere of “Beneath the 12-Mile Reef” starring Gilbert Roland & Robert Wagner (the second CinemaScope production after “The Robe”). On 3rd June 1959 the ‘Exclusive London Presentation’ of the roadshow version of Millie Perkins in “The Diary of Anne Frank” had its ‘By Invitation’ premiere. It opened to the public the following day, with evening performances for the evenings of 4th, 9th, 10th, 16th & 18th June already ‘Sold Out’. The stage was brought back into use briefly in March 1960, when Anthony Newley performed in “The Anthony Newley Show”, a special show which was staged during the run of his feature film “Let’s Get Married”. The World Premiere of “Guns at Batasi” was held on 24th September 1964. The World Premiere of “The Flight of the Phoenix” was held at the Carlton Theatre on 20th January 1966. The Royal World Premiere of “A Countess from Hong Kong” was held on 5th January 1967. Directed by Charlie Chaplin and starring Marlon Brando & Sophia Loren, Chaplin, Brando & Loren were among the attendees at the premiere.

There were hopes that the Carlton Theatre would be designated a Grade II Listed building, but it was turned down by English Heritage. The Carlton Theatre closed on 20th August 1977 with Oliver Reed in “The Prince and the Pauper”(aka-“Crossed Swords”) being the last film to be screened in the original single auditorium. The stage and dressing room block was sold off to developers and were demolished for an office block to be built on the site, known as Samuel House.

The Classic Cinemas chain took over and the auditorium was split into three screens, with screen 1 in the old upper balcony seating 491 and screens 2 and 3 in the former stalls seating 201 and 222. The former mezzanine Royal circle was sealed off and became office and staff areas. It reopened as the Classic Haymarket 1-2-3 on 10th January 1979 with a Gala Premiere in Screen 1 of Elliot Gould in “Capricorn One”. On 6th December 1985 it came under the ownership of Cannon. In March 1992 MGM took over followed by Virgin from 5th July 1996. It was taken over by UGC on 3rd March 2000, and latterly Cineworld from 22nd July 2005 until closing in January 2008.

On 2nd February 2008, the former upper balcony screen re-opened as the 440 seat Cinema Haymarket. The main Screen 1 was converted into a live theatre with the play “Brief Encounter” based on the David Lean film. Sequences in the play use digital projection as well as the live performances on a new stage which has been built on the front of the seating area. The two mini-cinemas in the former stalls area initially closed, but soon re-opened, screening first run films again. The run of “Brief Encounter” ended on 21st November 2008 and the main upstairs auditorium reverted back to cinema use, with the building becoming the Cineworld again. When the Empire Leicester Square was taken over by Cineworld in late-July 2016, they also ‘exchanged’ the Cineworld Haymarket and it was re-named Empire Cinemas London Haymarket from 7th April 2017. On 2nd March 2018 the play “Brief Encounter” returned to the main auditorium for a planned extended run until 9th September 2018. However, “Brief Encounter” ended its run early on 22nd July 2018 and the Empire has re-opened as a cinema on 31st August 2018 with a new larger screen and new seats. Screens 2 & 3 will be refurbished in early-2019. The exterior of the building has been cleaned.

Following several attempts by the Cinema Theatre Association with the assistance of the Theatres Trust to get the building listed, it was given a Grade II Listed building status by Heritage England on 17th October 2018. The Crown Estates who own the building had been planning demolition, apart from the façade to build a shopping precinct. They had to rethink their plans for the site. In July 2020 it was announced that the cinema would be refurbished. The two small screens in the former stalls area would each be twinned, creating a 5-screen cinema. The main screen 1 in the former upper balcony would be re-stepped to allow for larger seats and the long abandoned bars in the basement and balcony levels would be refurbished and returned to use as bars.

A bit of “cropping” should not be a problem, or is even desirable.

I’ve seen some “scope” films having with slight black “bars” to the left/right edges on some shots and not others, which is extremely irritating.

In the old CRT days, TVs invariably “overscanned” the image, with the edges cropped. TVs today still have an (anachronistically named!) “overscan” option setting, and sometimes it’s factory set to “ON.”

Anything that needs to be seen does not belong in the very edges of the frame. (This, of course, gets complicated by the existence of the IMAX-exclusive versions of films having scenes in 1.43 or 1.9:1 ratios, whilst the standard theatrical release is cropped to scope, but that’s another story…)

In any case, how did you find the picture/sound quality?

Visiting annually from the States, I love this cinema & try to see at least one movie upstairs in main auditorium. Picture & sound quality (7.1) were excellent! The picture filled the screen. I estimated the new larger screen at about 40 feet wide (for scope). The prior screen I had estimated as 32 feet or larger (for scope) & had seemed like a very large screen, considering sightlines. “First Man” which I saw in October, was great in this auditorium. In October 2017, “Blade Runner 2049” was what I had seen.

I’ve never been to this cinema before but shall give it a try on my next trip to London. Howard, considering the new bigger screen, where would you recommend sitting ? Thanks.

Lionel, I like to sit in the rear, the raised balcony section. With huge new screen, I sat in the top row (for max leg room) & screen still looked large! Most people though sit in the regular section of seats before the balcony, mid back to all the way back. All sight lines are great with this large screen!

I wrote that I’ve never been there but I suddenly have a doubt. I think I may have seen Dragonslayer in 1982 there, in one of the smaller auditoria, when I was a kid. I remember of classic and classy foyer surrounding looking like those found in old West End theatres (wooden panels and carvings, and that kind of things). Could somebody confirm that Dragonslayer was released at the Carlton too ?

Planning permission granted (reference 20/01144/LBC) for a full refurbishment with a reinstatement of original entrance design, screen 1 overstepped to allow for sofas to be installed, screens 2 and 3 subdivided to provide four screens, and a refurbishment of the basement bar and toilets.

Great that this wonderful historic movie palace will continue to showcase movies!

is it worth a visit from the us?