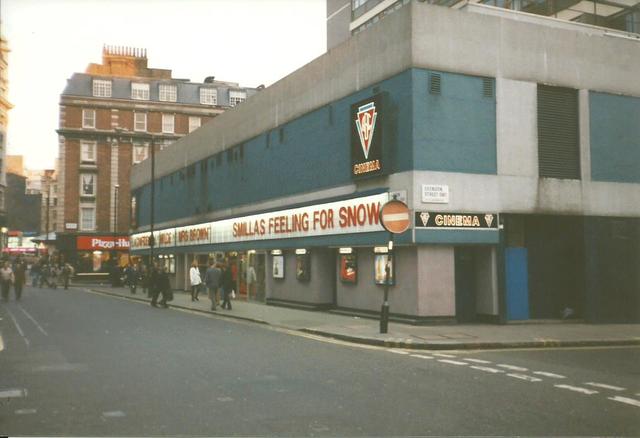 This was Europe’s first four-in-one cinema, and has a location on Panton Street, just off Leicester Square and Haymarket in the West End district of central London. It opened on 12th January 1969 with Jack MacGowran in “Wonderwall” playing in all four screens. The following day, “Wonderwall” remained in one screen, while “Les Biches”, “The Sinning Urge” and “Who Saw Him Die” opened in the other three screens. It was built for the Compton Group who operated several porn cinemas and had their own distribution company; Compton Cameo Films. They built several more Cinecenta cinemas in major cities in England, which like the Cinecenta Panton Street played mostly independent and foreign art house films.

Nigel Farrington of the architectural firm Farrington Dennys Fisher was the architect of this 587-seat complex which had seating in the four screens; 138, 154, 150 and 145. The policy was to play off-beat and Art House foreign films.

Further take-overs and name changes continued; MGM, ABC Cinemas and currently Odeon Theatres, who currently programme the cinemas with foreign and art house movies. It was closed for refurbishment on 22nd October 2017 and re-opened as the Odeon Luxe Haymarket on 14th December 2017. The total seating capacity has been reduced to 185.

An Odeon press release on the new LUXE auditoria at Putney, Haymarket and Swiss Cottage says that:

–“Each reclining screen will be upgraded with new speakers and Dolby 7.1 surround sound throughout to see the latest entertainment in style… –"Haymarket will include… four fully-refurbished screens with upgraded Dolby ATMOS sound systems… [and]… 24 speakers across all auditoriums.”

On Odeon’s website, no reference to ATMOS can be found under “Cinema information.”

I assume they mean 24 screens in each auditoria, otherwise that’s only enough for 5.1 in each, L/C/R/LFE behind screen, and a “rear array” comprising 2 speakers!

OTOH 24 in each would imply a seriously overspecified rear array for such small auditoria. Maybe they’re counting every driver (e.g. every woofer?) Go figure…

I never went into the old Odeon but may be tempted now it has been refurbished.

Can anyone tell me about the screens? I guess they must be relatively small given the size of the cinema, but are they a good size relative to the auditorium sizes? Have they changed with the refurbishment? Are they Scope?

I was in Screen 2 last week and it was very nice. They have a proper ‘scope screen, and they used their side masking for their flat trailers and ads, opening it for their 'scope feature. The reclining seats are so comfortable that I had trouble staying awake, even though I was enjoying the movie. The screen is kind of small and off-center to the front of the auditorium, but it couldn’t be any larger due to the width of the auditorium. The presentation was excellent.

Swindon Interiors were the principal contractor for the “Luxe” refurbishment, and the above linked page has photos of auditoria, foyer and toilets, with Dyson Airblade hand dryers prominently featured!

According to that page, the project also involved asbestos removal.

It appears Swindon Interiors have reused the photos of the Putney refurbishment on that page.

Zappomatic: Well spotted, thanks for the correction!

I just found these short films showing the animated sign of the cinema from 1969 when called the Cinecenta :

I recently bought a copy of Philip Turner’s book “Cinecenta Cinemas” (see it here . It’s an excellent book. Very rich of informations and illustrations despite its small size (A5 format, 30 pages). Copies are still available on various online shops including Amazon.