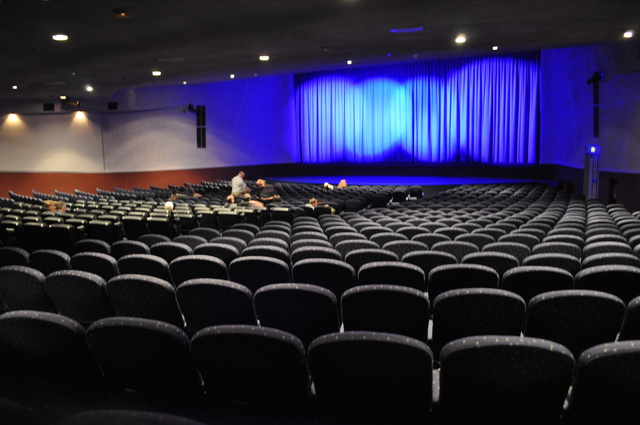 The Leicester Square Theatre was built for actor/film star Jack Buchanan and impresario Walter Gibbons. Jack Buchanan had a flat built on top of the theatre, which he occupied until it was damaged by German bombing in late-October 1940.

Initially intended as a live theatre, there were problems acquiring adjacent properties and the stage space proved insufficient. The Leicester Square Theatre was designed by architect Andrew Mather and opened on 19th December 1930 as a dual purpose live theatre/cinema with 1,760 seats in stalls, dress circle and upper balcony levels. There were three boxes adjacent to each side of the proscenium at dress circle level, but these were only used during live performances. The foyer walls were decorated with polished black marble. The first operators were Warner Brothers and the opening programme was the Warner Bros. two-tone Technicolor film “Viennese Nights” starring Vivienne Segal supported by a stage dance production including Balliol and Merton and the Victoria Girls. It was equipped with a Wurlitzer 3Manual/10Rank theatre organ.

It was taken over in March 1931 by RKO Radio Pictures. In July 1931, Gracie Fields appeared for a week ‘twice-nightly’ as a prelude to her film “Sally in Our Alley”. Jack Hulbert’s song and dance show ‘The R.K.O. Loudspeakers’ was staged as part of the film programme in August 1931. It was taken over by County Cinemas and re-named Olympic Theatre from 21st March 1932, re-opening with John Stuart in “In a Monastery Garden”. County Cinemas had commissioned architect Alister G. MacDonald to re-design the entrance and the interior was re-designed by Edward Carrick. A revolve was installed in the centre of the stage at this time. It closed in July 1932 and Jack Buchanan took control again. In August 1932 films were dropped in favour of non-stop variety which began with ‘Non-Stop Revels’ live on stage, non-stop from two ‘til midnight daily. Marie Kendall singing 'Just Like the Ivy’, was one of the artistes appearing. This policy lasted for almost a year.

It was taken over by United Artists and re-opened on 27th September 1933, as a full time cinema, re-named the Leicester Square Theatre again and re-opening with Jack Buchanan’s own film for United Artists “That’s a Good Girl”. The World Premiere of “Things to Come” starring Raymond Massey was held on 21st February 1936. It played United Artists pictures first run in London until it was closed again on 18th July 1937 for redecoration. It re-opened 16th September 1937 with “Victoria The Great” staring Anna Neagle.

In 1938 General Film Distributors took control (J. Arthur Rank was one of the directors) and it became the first West End Cinema to be controlled by what would become the Rank Organisation in later years. It was closed for almost a year from late-October 1940 when it suffered bomb damage. It re-opened 11th July 1941 with “The Flame of New Orleans”. Oscar Deutsch’s Odeon Theatres Ltd. took over in July 1946 and they closed it in July 1950 for some repairs to be carried out to the war damage. The UK premiere of Walt Disney’s “Alice in Wonderland” was held here on 26th July 1951. Further repairs were carried out in 1955. The UK premiere of Laurence Olivier’s production of “Richard III” took place in August 1955, and it ran here for thirteen weeks. “The Longest Day” played as a ‘roadshow’ presentation from 11th October 1962 until 4th September 1963. The UK premiere of “Mary Poppins” opened here on 17th December 1964 and played for several weeks before transferring to the Odeon Haymarket. The World Premiere of “A Study in Terror” was held on 4th November 1965. The World Premiere of “Sky West and Crooked” was held at the Leicester Square Theatre on 19th January 1966. A Gala World Premiere of “The Wrong Box” was held on 26th May 1966. On 15th September 1966 saw the World Premiere of “The Trap”. A Gala Premiere of Dean Martin in “Murderers' Row” was held on 24th January 1967. A Premiere for “Maroc 7” staring Gene Barry was held on 22nd March 1967. On 25th May 1967 the Premiere of the (X) certificated “Stranger in the House” was held. The European Gala Premiere of “The Happiest Millionaire” starring Tommy Steele was held here on 26th October 1967. The Leicester Square Theatre was closed on 3rd April 1968 with “Carry On Doctor”. The cinema was to undergo a complete interior re-construction. The detailed French Renaissance style interior was hidden from view, and the Wurlitzer organ which was played at special organ concerts right up to closing was removed from the building.

Architects Arnold Dick Associates designed a new ‘modern style’ single screen cinema within the shell of the building, with a stalls and circle seating areas (removing the upper balcony) and the interior design was by Cassidy, Farrington and Dennys. Seating was provided for 1,407; 900 in the stalls and 507 in the circle. The Leicester Square Theatre re-opened on 12th December 1968 with a Royal Charity Premiere attended by H.R.H. Princess Margaret & Lord Snowdon of “Shalako” starring Sean Connery. It was equipped for 70mm presentations. Over the following 48 years it hosted many film premieres including “Papillon” in March 1974, “Tommy” in March 1975 and “Crocodile Dundee” in 1986.

The historic facade remains virtually untouched to this day, although partly hidden by metal cladding, and the entrance and lobby have been significantly altered. In October 2008, plans were approved by Westminster Council, to demolish the Odeon West End and build a 240-bed hotel on the site. There will be two new screens in the basement, with seating for 440 and 200. Demolition and building work was due to begin in the Summer of 2009, but the plans were put on hold due to the economic situation. The Odeon West Wend had an exclusive run of “The Master” from 2nd November 2012, playing a 70mm print of the film. The cinema in its later years was also the West End base for the annual London Film Festival.

A new set of plans for a hotel were approved by Westminster Council on 21st January 2014, and the Odeon West End closed on 1st January 2015. The final films were “The Hunger Games:Mockingjay, Part 1” showing in screen 1 upstairs (489-seats) and “Interstellar” showing in screen 2 downstairs (814-seats). “Interstellar” had been screened in a 70mm print until 24th December, and was replaced by a digital copy for its final 7-days. Odeon Theatres had four days to remove their equipment from the building which was handed over to the demolition contactors on 5th January 2015, and demolition began in April 2015 and was completed in September 2015.

A new Londoner Hotel was built on the site which contains a 2-screen Odeon Luxe London West End in its basement which opened on 9th September 2021. (It has its own page on Cinema Treasures).

I think the rendering shows the basic form/layout of the auditoria but I can’t imagine that the finishes will look as shown. The seating arrangement drawn seems to include some oddities, too; but it does suggest that the recliner/premium seating approach will be taken with a commensurate reduction in capacity.

Disappointing to see a floating screen in the main auditorium; that’s how it is drawn in the planning application also.

Still, the larger auditorium, as drawn in the planning application, includes a ~50ft. wide screen, so one might still hope for an ISENSE screen with laser projection and Atmos sound…

A website has been launched for the hotel (“The Londoner.”) According to the site, the hotel is scheduled for opening in Spring 2020.

Update: Looking at the new building externally a couple of days ago, the majority is obscured by scaffolding with fire-retardant sheeting.

However, it appeared that at least some windows have been fitted, and much Rockwool was at the ready on multiple levels.

According to a newsletter posted on the ground-level site hoarding, dated August 2019 (!), “facade works are in progress on all elevations”. Mechanical & Electrical service installation and fit-out are also “in progress on all levels.” Of course, it might well be expected that this does not include the cinema fit-out just yet…

According to a brochure on the hotel’s website, the opening date for the hotel is June 2020. Among the many facilities listed in the brochure are “two screening rooms,” which I assume is a reference to the new Odeon’s two auditoria—which will of course, in any case, be available to book.

(The renderings of the hotel’s interior look impressive, but this isn’t “Hotel Treasures” (!)—suffice it to say that it’s too bad that a “hotel palace” is being completed on the site of a “picture palace.”)

Façade is (finally!) nearing completion. A photo taken a couple of weeks ago has been uploaded. Looks very good.

As an aside, I had a very odd dream last night in which I visited the foyer of the “new” OWE. It had opened before the hotel, was at ground level, not very big but very busy. A frequent cinema-related dream that I have is a nightmare about the old Empire 1 being stripped out; the replacement OWE is highly unlikely to leave an such indelible impression on my soul, as it were!

The hotel’s website now says that the hotel will be “premiering late 2020.” 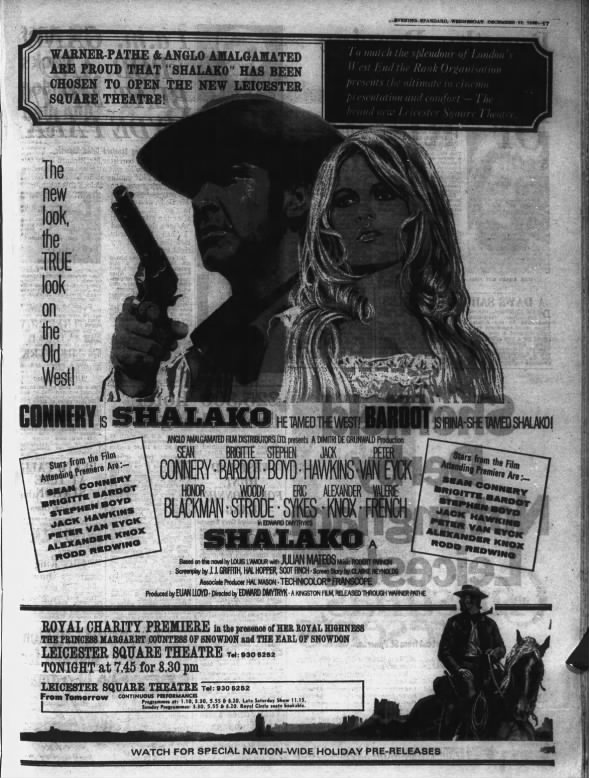 Hard to believe it was 7 years ago, but I still remember the following comment:

I replied that it was a planning condition that, in effect, they would. The local authority is Westminster Council, and this is Leicester Square of all places… and so they have.

Of course, this does not mean that everyone would consider the eventuated cinema to be any better than no cinema!