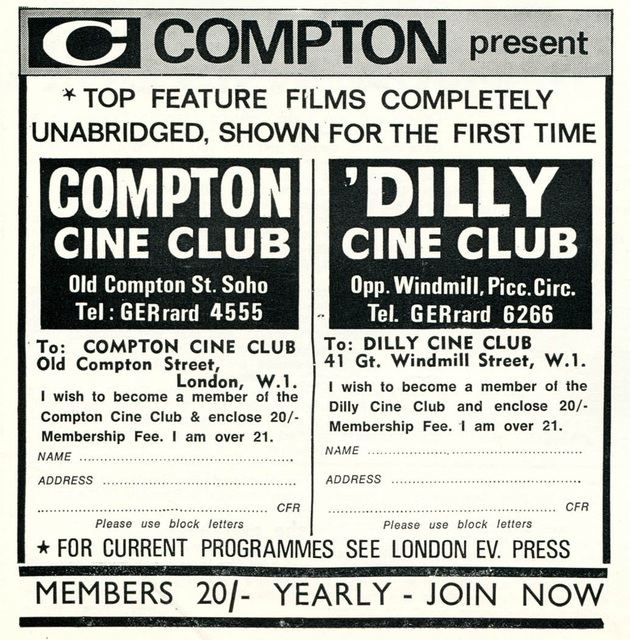 Located almost adjacent to the Cameo Moulin Cinema (later Cannon Moulin), and directly across the street from the famous Windmill Theatre in the Soho district of central London. The building has the name ‘Fuller & Richards – 1904’ set into the stonework, but I am not sure what the business was when originally built. It was later in use as a nightclub/restaurant known as the Panama Club. It was a jazz club and was part of Max’s Rehearsal Rooms in the late-1950’s and early-1960’s.

In 1965, it was taken over by the Compton Group and converted into a sex cinema known as the ‘Dilly Cineclub, with admission for members only, who watched uncensored films. On 11th May 1976 it became a public cinema, opening as the Dilly Cinema with "Cat At Night" and "Jungle Sex", by this time it was part of the Cinecenta chain.

In November 1985, it was taken over by the Cannon Group and re-named Cannon Dilly. It soon became merged with the nearby Cannon Moulin Cinema and became Screen 6 of that cinema complex, which closed on 12th April 1990.

The building has been converted into offices, currently used by Red Consultancy.