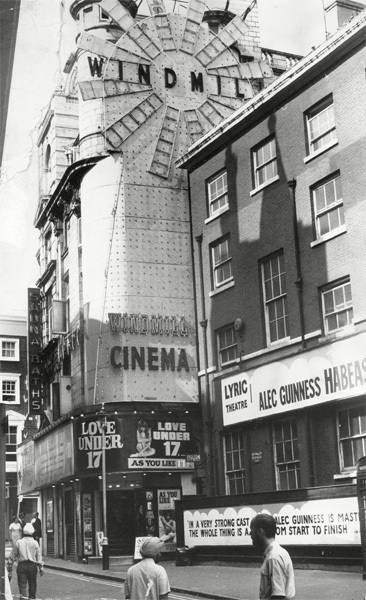 Opened as the Palais de Luxe Cinema on 20th December 1909. A seating capacity of 600 was claimed in stalls and a stepped rear stalls area. It had a tiny corner entrance which remains to this day. In the late-1920’s it became Britain’s first art house cinema and was under the direction of Elsie Cohen.

In 1931 architect F. Edward Jones made alterations to the building to convert it into a live theatre. A new façade was added in the style of a windmill with turrets and balconies carried out in a traditional style and covered in white faience tiles. Inside the auditorium there were 320 seats in stalls and circle levels and the interior design was by Mrs Laura Henderson in tones of beige and brown. It opened as the Windmill Theatre on 22nd June 1931 with the play “Inquest” by Michael Barringer staring Mary Glynne and Hilda Trevelyan. Unfortunately ‘legit’ theatre was not a hit here and in the autumn of 1931 it had returned to screening art house films.

Mrs Laura Henderson introduced London to a new kind of show which originated in Paris. Called ‘Revuedeville’ it featured 18 acts of non-stop variety turns which to start with was not a great success. However, once naked girls posing was introduced into the programme, it drew large crowds and became one of London’s must see attractions. Opening on 3rd March 1932 (some sources give 4th February 1932) it ran daily, continuously until 31st October 1964, a total of 32 years). Theatre manager Vivian Van Damm proclaimed the Windmill Theatre slogan ‘We Never Closed’ as the shows and the theatre became famous through the war years. The Windmill Theatre did actually close along with all other forms of entertainment when a compulsory closure order came into effect from 4th September until the 16th September 1939. Mrs Henderson died in 1944 aged 82, but the show went on. The famous sign on the front of the building depicted the sails of a windmill revolving around and this remained in situ for many years.

After closing as a live theatre in 1964 it was purchased by the Compton Cinema group and was renamed Windmill Cinema, opening on 2nd November 1964 with “Nude Las Vegas” & “Paris Playgirls”. Classic Cinemas chain took control from May 1966 and began a long 18 month run of Julie Christie in “Darling”. In 1968 it was ‘modernised’ when the entire auditorium was draped over with curtain material. It closed as a cinema on 9th June 1974 with “Sex of Their Bodies” and Jackie Lombard in “Love-Hungry Girls” (Les Garces).

It was sold to sex industry impresario Paul Raymond and the name Windmill Theatre returned to the building until 1984, when it was re-named La Vie en Rose Theatre Restaurant. A sauna & massage parlour was opened in the basement of the building. In 1986 it became Paramount City a live show venue that also hosted TV shows for a while. In recent years it became the Windmill International, staging adult live entertainment for the gratification of men who like to have a naked girl in their lap! It lost its licence and closed in 2018 due to inappropriate behaviour of its male patrons. In May 2019 it was announced that it will be given a £10million overhaul to become a cocktail bar. In March 2021 plans were announced that following a £10m renovation it will be returned to live theatre use as a 350-seat Windmill Soho Theatre, presenting cabaret and a dining experience, which opened in May 2021.

The Windmill Theatre has been the mainstay of plots in at least two films: Rita Hayworth in “Tonight and Every Night” (1945) filmed at Columbia Pictures, Hollywood studio, and Judi Dench and Bob Hoskins in “Mrs. Henderson Presents” (2005) filmed at Shepperton Studios, England. Three films were actually shot at the Windmill Theatre; the 1949 British film “Murder at the Windmill” (aka in the USA as “Mystery at the Burlesque”), the 1966 British film staring Pauline Collins “Secrets of a Windmill Girl” in which scenes were filmed on the stage just prior to when the theatre closed in 1964, and the little known 1983 video film “A Night at the Revuebar”.

Some more exterior photographs of the Windmill Theatre:
View link

recent shot of the windmill forms the background to one of my new pieces of work for a gallery show that opens in december.
The Windmill is still one of the “old school sleazey” neon gems of Soho that are rapidly dissappearing
http://www.flickr.com/photos/woody1969/1508443449/

I worked over the road from that when it was Paul Raymond live sex show in the classic Gt Windmill street Jo Bradford worked there too when studios 1 & 2 was made in to 4 .it ended up as a video game arcade

No mention here of the West End musical version of “Mrs. Henderson Presents”. I love this theatre’s history.

my great grandfather Ludwig Schlentheim was the owner of Somerald and Co, the first owners of Palais de Luxe in London opened in 1909.

My great grandfather went bankrupt due to anti-german racist sentiment of the investers of the theatre. He died in his car crossing a London bridge, probably from a heart attack from stress. He was also a founding member of the AA in 1905 which is still in existence today. The love of film continued through the family and my father Jeff Seaholme was an Ealing cameraman filming many of the comedies and hand picked by Charles Chaplin to film ‘A King in New York’. he also filmed Polanski’s cul-de-sac.