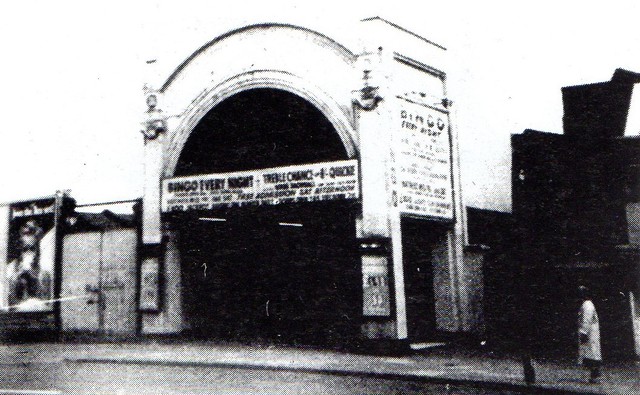 Although first known as the Ilford Corona Cinema, it was actually located outside the Ilford boundary. It opened on 15th September 1921 with Edith Hallor in "The Blue Pearl" and Milton Rosmer in "The Diamond Necklace". There was an arched entrance, while inside the auditorium, seating was provided in stalls, circle and boxes. The cinema also had a tea lounge.

In August 1954, they were taken over by the Essoldo Cinemas chain, based in Newcastle upon Tyne and it was re-named Essoldo in 1955.

The Essoldo was closed on 21st September 1963 with Rock Hudson in "A Gathering of Eagles" and Audie Murphy "Hell Bent For Leather". It was converted into a Vogue bingo club, which opened on November 2, 1963. It was later closed and the building was demolished in 1970. Housing was built on the site.

My sister and I made our one and only visit to this cinema (our regular haunts were the Odeon Gants Hill and the State Barkingside)in April 1962 as it was the only place locally showing It’s Trad Dad. I vividly remembered the supporting film, a Japanese sci-fi effort, but it took me years to figure out what it was. It turned out to be Battle in Outer Space and I now have both films on DVD so can recreate the double bill! The Essoldo takeover presumably made this a Fox circuit house between 1954-1958 and the only place in the Ilford area showing Fox CinemaScope films regularly (I believe the State Barkingside showed some but ABC would not commit it to the Fox output.)

An old friend rang today and mentioned the Essoldo Manor Park which prompted me to look it up here.

I recall ‘It’s Trad Dad’ being the very last film I saw at one of my boyhood local cinemas, the Hippodrome Shildon before it succumbed to Bingo later in 1962. The second feature only had a few minutes remaining when my mother,sister and I entered the circle and I remember wishing that we had seen it from the beginning as it looked exciting. To this day I have never been able to discover its complete title even though part of it was ‘…In Outer Space’

Assuming it was from the same distributor as the main feature I even checked all Columbia releases of the 1950’s and 1960’s but without success until today,that is, when I can finally say that the mystery has been solved!

An ABC Manager and lifelong friend (until his passing in 2017) had briefly managed the State Barkingside in 1970 before transferring to the ABC Regal Wembley thence back ‘up north’ to the ABC Ritz Wigan.