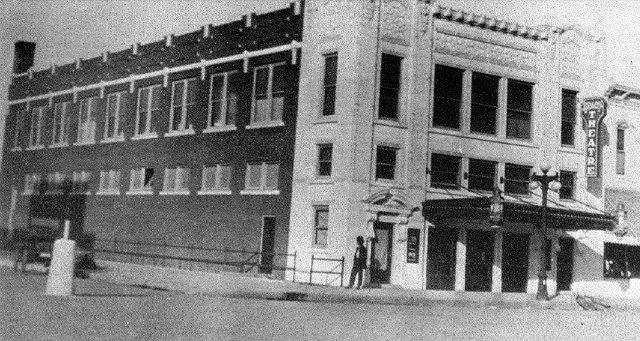 The Brach Theatre opened on October 2, 1916 with Orrin Johnson in “The Light at Dusk”. The architect for the Brach/Strand was C.W. Way. It was equipped with a pipe organ. Seating was listed at 700. On July 6, 1917 it was renamed Strand Theatre.

The theatre was operated by Central States Theatres when it closed on March 30, 1984. The building is now used for office space.

The Adams County Historical Society provides this web page with information about the Strand. There are also two photos.

A book called Past and Present of Adams County, published in 1917, says: “The Brach Theater was erected by William Brach and is the first elaborate, exclusive moving picture theater to be erected in Hastings. The house was opened October 8, 1916. Charles A. Beghtol is the proprietor.”

The May 13, 1916, issue of Motography had an item about the proposed theater, though it got the name of the owner wrong:

“The office and theater building being erected in Hastings by William Branch [sic] has been leased by Charles A. Beghtol of Denver. The latter expects to take possession by September 1. The first floor will be used exclusively for a moving picture theater, which, Mr. Beghtol and the designers say, will have no superior in the west. The lobby will be especially elaborate, with tile floor and marble trimmings. The installation of an orchestra organ is contemplated.”

The Brach Theatre opened with a Louis the XIVth style on October 2, 1916 with Orrin Johnson starring in “The Light at Dusk” showing on the Gold Fibre screen. The $8,000 pipe organ wowed as did the terra cotta front and interior marble work. C.W. Martin took on the venue on July 1, 1917 to make improvements and renamed it the Strand Theatre at a relaunch on July 6, 1917 with Earle Williams in “Apartment 29.”

On October 26, 1929, the Strand relaunched after a brief refresh and now with Vitaphone sound to keep pace with the Rivoli. The Strand added widescreen projection in 1954 to present CinemaScope titles. It was still open in 1964. Central States took on the venue closing at the end of a 20-year lease on March 30, 1984.