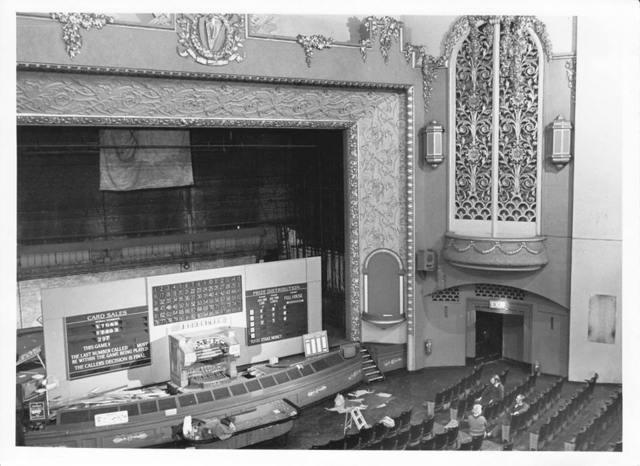 Located in the southeast London district of West Norwood. The beautiful Regal Cinema was opened on 16th January 1930, and was built by A.E. Abrahams. It was equipped with a Christie 3Manual organ. Taken over by the Hyams & Gale chain 24th April 1933, it was taken over by Gaumont British Theatres(GB) in October 1935.

Closed in late-1939 due to war-time conditions, it was re-opened on 3rd November 1940. The Regal Cinema was closed by the Rank Organisation on 8th February 1964 with a Peter Sellers double bill programme “I’m Alright Jack” and “Two Way Stretch”. It was converted into a Top Rank Bingo Club. The bingo club closed in 1978, and it was demolished in November 1981. A B&Q DIY Homestore was built on the site.

The Regal was built for A.E. Abrahams and opened on 16th January 1930. It was leased by Hyams & Gale from 24th April 1933 and taken over by Gaumont Super Cinemas in October 1935. It was equipped with a Christie 3Manual theatre organ.

Closed due to wartime conditions at the beginning of the war, it re-opened on 3rd November 1940. The closing programme on 8th February 1964 was the Peter Sellers double bill;“I’m Alright Jack” plus “Two Way Stretch”. It immediately became a Top Rank Bingo Club which opened on 20th February 1964 and it closed in 1978. The building was demolished and a D.I.Y. hardware store was built on the site.

I WORKED AT THE REGAL WEST NORWOOD ABOUT 1940. IT HAD A BEAUTIFULL ORGAN PLAYED BY BETTY MITCHELL, THE ORGAN WAS DESTORYED BY FIRE IN AN AIR-RAID, I WAS THERE AT THE TIME I COULD HAVE SAVED THE ORGAN BUT THE FIRE HOSE WAS DEFECTED IT HAD ROTTED OVER THE YEARS.THE SAFETY CURTAIN WAS LOWERED EVERY NIGHT DURING THE WAR IF IT HAD NOT BEEN DOWN THE REGAL WOULD HAVE BURNED DOWN THEN. WORKING AT THE REGAL WAS THE BEST JOB I EVER HAD.I WAS SADDENED TO HEAR IT IS GONE FOR-EVER.I NOW LIVE IN THE USA SINCE 1952 BUT I STILL FONDLY REMEMBER THE BEAUTIFULL REGAL.
KENNETH JUKES.

My Grandfather had a bakery in Brixton (J Ensing & Sons) and used to have an advertising board for the Regal West Norwood outside of the shop.
As payment, he used to get two complimentary tickets each week. He was given a small book which was stamped each time it was used.
I recall the cinema had boxes and as a complimentary ticket holder you were allowed to sit anywhere so this was always a favourite option. Very posh.

Scroll down to see vintage photo of auditorium:
View link

Page 11 of brochure linked above.

Apparently the Regal Christie organ was not destroyed in the fire (which was as a result of a direct hit on the stage end by a bomb).But the percussion thumpof the bomb caused everything in the pipe chambers to lift up several inches and down again and everything fell about and was considered a write off.BUT the Standaart cinema organ from the Metropole in central London(which was bigger than the Regals organ) was being stored on the stage and as this was completely destroyed as it was behind the fire curtain.So this is the one that Kenneth was probably thinking about.