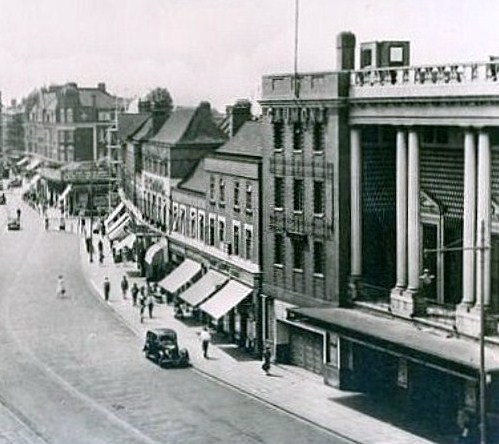 Located in the south-west inner London district of Streatham. The Gaumont Palace opened on 14th March 1932 with 2,381 seats. It was designed in an Art Deco style by architectural firm of Charles Nicholas & J.E. Dixon-Spain. It is located on Streatham Hill at the corner of Ardwell Street. It featured an open-air terrace above the entrance which served teas on good weather days! The Gaumont Palace had a large fully equipped stage house and numerous dressing rooms. It was equipped with a 3Manual/10Ranks Compton organ.

In early-July 1944 it was seriously damaged by a German V1 rocket bomb and was closed. The damaged building then became a temporary factory until building restrictions were lifted and the interior was entirely reconconstucted to the designs of architectural firm T.P. Bennett & Son.

It re-opened as the Gaumont on 18th July 1955 with Dirk Bogarde in "Doctor At Sea". The seating capacity was now reduced to 1,873. It closed on 25th March 1961 with Sophia Loren in "A Breath of Scandal" and Joy Barney in "Blueprint For A Robbery".

The interior was re-constructed again and it was converted into a 36-lane bowling alley known as the Streatham Bowl which opened on 29th January 1962. Part of the bowl was converted into a laser-drome. The Streatham Bowl and laser-drome were closed in early-2008 and plans are proposed for re-developement into housing. Demolition began in late-October 2014. The facade was retained and the ground floor now serves as a M&S Food store.

Derek Palmer was the first Chief Engineer at Streatham Bowl. I worked with him at the Gaumont Clapham as a trainee projectionist, where he was the Chief Projectionist. When The Gaumont closed, I went to the Odeon East Dulwich as a fourth projectionist for a while, but later joined Derek as an assistant engineer prior to the Bowl being opened. I later returned to cinema work as 3rd Projectionist at the ABC Streatham.

Now boarded up and looking very, very sad. in a very poor condition.

I think my grandfather and his brother owned this cinema back in the 1920’s. He had others in Twickenham and Mill Hill, that I know about. Any information would be fantastic.