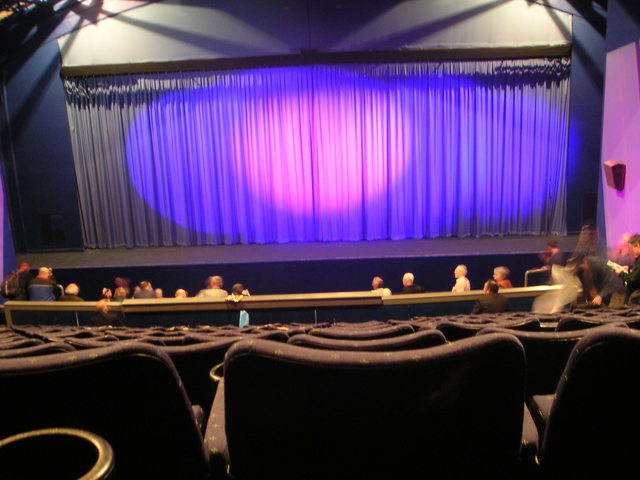 Located in the southwest London district of Streatham. The Astoria Theatre opened on 30 June 1930 with Jack Buchanan in “Paris”, plus a variety show with over 100 performers including Teddy Brown playing the Xylophone and 10 other acts. Seating was provided for 2,614 in stalls and circle levels. It was the third of the 4 famous Astoria Theatres which were built in the suburbs of London by independent exhibitor Arthur Segal.

The exterior is designed in a ‘modern’ style, the the walls in multi-coloured brick, with stone embellishments and a tiled roof. The interior was Egyptian in style and was designed by interior designers Marc-Henri & G. Laverdet. There were originally fish tanks in the foyer. Inside the auditorium were two large bas relief panels on the side-walls at circle level, one representing a hunting scene with horses and chariots and lions, and the other representing a river scene with boats, both murals having a stylised Egyptian background. The ceiling of the auditorium had a complex lattice work which was suspended, and was backlit with varying colours, giving a semi-Atmospheric style appearance to the building. The theatre had a fully equipped stage and dressing rooms, there was a Compton 3Manual/12Rank theatre organ, which was opened by Al Bollington. Above the entrance was a café, again decorated in an Egyptian style.

It was taken over by Paramount Pictures in December 1930 and then by Oscar Deutsch’s Odeon Theatres Ltd. from 27th November 1939. It was closed by the Rank Organisation on 2nd September 1961 for modernisation, which removed most of the interior, except the auditorium ceiling. The final programme in the original auditorium was “Information Received” and Rock Hudson & Kirk Douglas in “The Last Sunset”. It re-opened on 18th September 1961 as the Odeon, with film star Juliet Mills attending in person and a Gala screening of her latest film “No, My Darling Daughter”. During the 1960’s and into the 1970’s, the stage was brought back into use. In 1968, the London Festival Ballet presented two succesful seasons and a pantomime “Cinderella” starring Dick Emery & Joe Brown was staged for 3 weeks at Christmas 1968. At Christmas 1969 the pantomime “Aladdin” was staged, starring Herman’s Hermits and Norman Vaughan. The London Festival Ballet returned in 1970 and Tony Blackburn starred in a pantomime in 1974. One night stands of concerts by The Four Tops, The Supremes, Mud, and Stevie Wonder were staged in late-1978. The last live show to be staged at the Odeon was a concert by Ian Drury in December 1978.

The Odeon was tripled from 16th December 1979 with 1,095 seats in the former balcony screen, using the original projection box, and opening with “Death Sport”. Two 267 seat screens beneath the balcony in the former rear stalls, with a newly constructed projection box, opened with Harrison Ford in “Hanover Street” and “Casey’s Shadow” in screen 2, and Klaus Kinski in “Nosferatu The Vampire” in screen 3.

Another new screen was installed in screen 1 on 16th November 1984, this was placed in front of where the original balcony front was located, making screen 1 a more intimate space and improved the acoustic properties of the cinema. Some of the original lattice-work ceiling still survives in screen 1. In September 1991 a fourth screen seating 240 was added in the former front stalls and a fifth screen seating 196 was built on the former stage.

A much earlier photo here : part of a collection I bought from ebay

a fabulous picture here of the upstairs foyer !

I have a photo of the circle foyer which was virtually destroyed in September 1961.The pillars shown in the photo were boxed in (they are actually support girders underneath)the American Oak circle entrance doors were covered over and the gold leaf ceiling painted black. A false ceiling was laid towards the foyer windows and everything below was hacked away.To this day some of the decoration can still be viewed from above if you know how to get up there. The foyer until 1961 was also used as the Astoria Resturant and tea-rooms.
Anyone lucky enough to have a copy of The Rank Organisation’s “Look at Life” No 158 released on 15th March 1962 called “The Cinema Steps Out” can actually see the “refurbisment” of this lovely foyer taking place.Mind you it’s nothing compared to what was done to the auditorium at the same time.In my 35 years there it went from 1 screen to 3 screens to 5 screens and then it’s current 8 screens.

The Odeon 1 in the late 80s, early 90s used to be a great size screen on which to see new releases. At the time it must have been one of the biggest screens left around London. I can’t fathom out why they would even want to try and fit 8 screens into one building that size- yes it’s a big building but 8 screens!
I remember seeing ‘Roger Rabbit’ with a full house there and a few others around that time and the place was always full, so why chop it up.

Basically the screen in Odeon One is still the same size and is indeed the same size frame which was installed in 1991 when the theatre was converted from 3 to 5 screens.What spoils it now is (2) Two Hundred or so seater screens have been installed either side at the rear of the old circle creating a sort of tunnel effect for those sitting in the rear half of Odeon One.For the record the remaining screens are two in the rear stalls two in the front stalls and one built sideways the other side of the stage Safety Curtain on the actual stage itself going from actors left to actors right.The old Orchestra pit is still there and if one looks over the ski ramp in front of screen 4 the steps down into the pit for the conductor are still visible.

I believe the vertical “cut-out” name sign around the corner to the right of the frontage is the one removed from the Odeon Haymarket. Although the lovely Haymarket cinema was closed by the time of the “Fanatical rebranding exercise”, there was still talk of it reopening so it’s red neon against a blue background sign was replaced by one of the new, silver cut-out type (only correctly readable from one direction although the designers, Wolff Olins, felt the mere shape of the characters was enough for the brand to register).

The opening programme of the Astoria dated June, 1930 is held by the Kent MOMI Museum, Deal, Kent