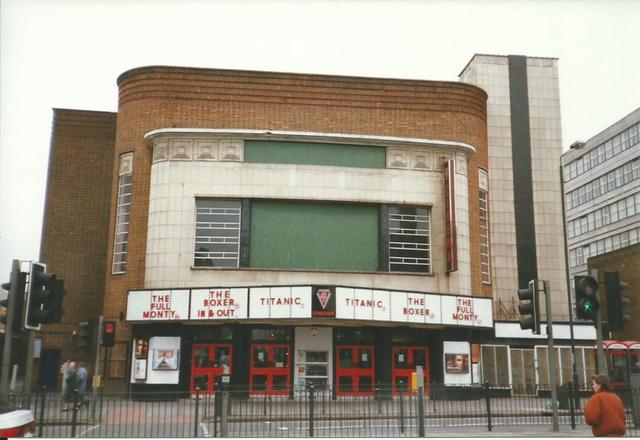 Located in the southwest London district of Streatham. Built for and opened by Associated British Cinemas Ltd.(ABC), the Regal Cinema was a splendid example of an Art Deco style cinema building from their in-house architect William Riddle Glen. The Regal Cinema opened on 14th November 1938 with Ginger Rogers in "Vivacious Lady" and Shirley Ross in "Prison Farm".

There was a double staircase in the foyer which led to the circle foyer, typical of a Glen design. In the auditorium seating was provided for 1,232 in the stalls and 730 in the circle. The side walls of the circle had backlit niches in the sidewalls which contained Art Deco style figurines.

From 16th October 1960 the Regal Cinema was re-named ABC. In early 1977 it was closed for conversion into a triple screen cinema which re-opened on 7th April 1977. Seating was now provided for 630 in the former circle with two smaller screens seating 432 and 231 in the former stalls area.

It was later re-named Cannon Cinema when the Cannon Group took over ABC, but was later bought back by ABC and re-gained that name until finally closing in December 2000. It had been given a Grade II Listed building status, but there was concern that this listing only covered the front section of the building and not the auditorium.

Squatters moved in and caused several fires and there were illegal ‘rave’ parties in the empty building. It was purchased by a property development company for re-development and the auditorium was demolished in September 2004. New apartments were built on the site, with the Grade II Listed original cinema façade and foyer retained as an entrance.

A photo whilst still operating as a cinema here:–

I worked at the ABC Streatham in 1962 as a 3rd Projectionist and later Junior 2nd until circa 1967. I think I had a short break in between this time, but my memory is a bit foggy these days. Ed Weaver was the Chief Projectionist and Harold Pritchett was Co Chief. Fred Costello was Senior Second. The Manager at that time was Bill Wyatt. I have a photograph taken in the upstairs lobby of staff celebrating Ed Weaver’s retirement. I will put it on my flicr site and post it later.

And here’s the photograph: View link

Only the facade and foyer (designated a Grade II Listed building) were able to survive. Seen here with the new flats pojects on the now demolished auditorium space, almost completed in October 2006:
http://flickr.com/photos/92215570@N00/293051127/

photos from late 2003 as the auditorium was being demolished…
rear shot showing the half demolished auditorium, you can see the original paint colour brown, orange and beige on the front walls that were hidden by the tripling (the usual grim red and purple ABC colours)
View link
front shots with the tower intact before the top was cut off in the convertion to flats
View link
http://flickr.com/photos/woody1969/47990144/

photos taken april 2009 showing the refurbished facade, the lobby space is available for rent for restaurant useage, you can look up through the glass over the front doors into this huge white space and see the original plasterwork ceiling and a large chandelier
http://www.flickr.com/photos/woody1969/3427699290/
http://www.flickr.com/photos/woody1969/3427701896/