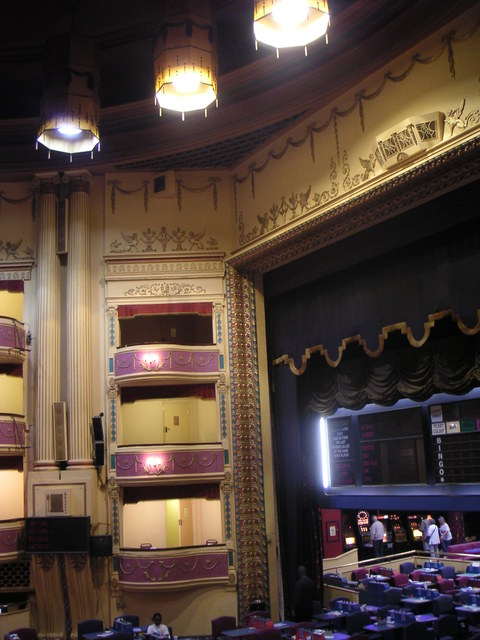 Located on the corner of Streatham Hill and Barrhill Road in the southwest London district of Streatham. The Streatham Hill Theatre was the last theatre to be designed by noted theatre architect G.W.R. Sprague. He designed it together with architect W.H. Barton. It was one of the largest live theatres to be built in the suburbs of London.

The Streatham Hill Theatre opened on 20th November 1929 with Jessie Matthews and Sonnie Hale starring the the stage production of the musical "Wake Up and Dream". The theatre has an impressive façade covered in Doulton faiance tiles. There are three bays, with the central bay slightly recessed providing a small balcony with Ionic columns. Inside the lavishly decorated Adam style auditorium, seating is provided in orchestra stalls, dress circle and balcony levels, with six boxes on each side of the proscenium. There are more Ionic columns along the side walls, and friezes, depicting sphinxes and angels. The dress circle bar has mahogany panelled walls and painted murals depicting scenes of old London.

The Streatham Hill Theatre was always independently operated, and was a popular live theatre in this south London suburb. It had limited cinema use, with films being screened on Sundays in the late-1930’s, a day when live performances were prohibited.

Disaster came on 3rd July 1944, when the auditorium of the Streatham Hill Theatre received a direct hit from a German V1 rocket bomb. One person was killed and several were injured. Due to building restrictions after the end of World War II, it remained a derelict shell. But as the Streatham Hill Theatre had previously operated so successfully, the theatre was restored back to its original splendour, re-opening on 26th December 1950. It was operated by the same company who operated the Golders Green Hippodrome Theatre in north London.

With the introduction of Television in the early-1950’s and commercial TV in 1956, theatre attendances began to ebb, and the Streatham Hill Theatre was closed on 9th June 1962 with a production of "The Rehearsal".

It was refurbished and was converted into a Mecca Bingo Club which opened on 14th November 1962. Boxing matches and talent shows were also staged on certain nights. The theatre was sold to an independent operator in 1964 operated as the Riva Bingo Club. It was finally operated as a Beacon Bingo Club until it closed on 28th January 2017. A small room located on the left hand side of the foyer of the building has been converted into a Cashino, a slot machine entertainment centre which has the machines paying out cash prizes. The foyer and auditorium are not in use and have been sealed off.

The Streatham Hill Theatre is a Grade II Listed building.

Correction: last operated by Beacon Bingo, they closed it in 2019.