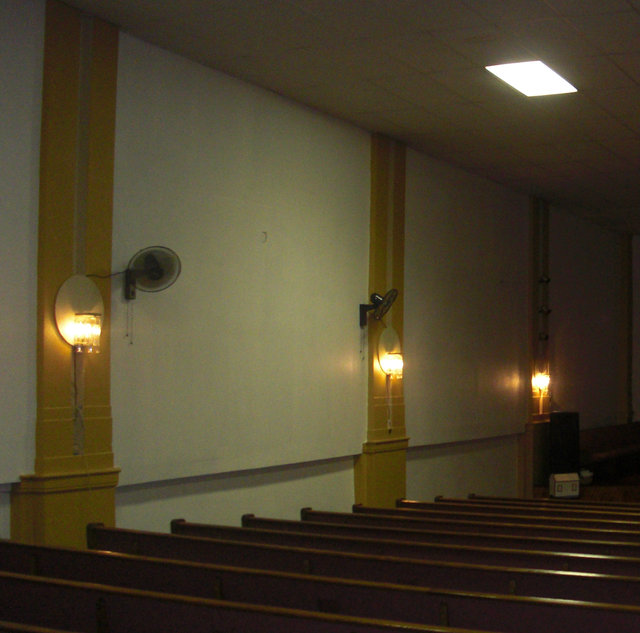 Opened as the Royal Theatre in 1928 and was later renamed the World Theatre. Seating was given at 420. The architectual firm for the World was Gurda & Gurda. This theatre was part of the Fox Theatres chain for a while.

The World Theatre closed in 1985 and later became a church. Any further information on the World would be appreciated.

On the Google Maps streetview, the name “Iglesia Pentecostal” can be seen on the marquee.

You can still see the ticket booth, and the globes in the architecture, which appear to be painted blue.

The Wisconsin Architecture and History Inventory at the Division of Historic Preservation-Public History in the Wisconsin Historical Society, Madison, lists the World Theatre as being built in 1926. It’s been on the National Register as of December 12, 1978 and on the State Register as on January 1, 1989 as part of the Walker’s Point Historic District. The original seating capacity was listed at 750 and the original estimated cost was $30,000. After decades of church use, the theatre surprised many in mid-1984 by briefly reverting to double-feature film offerings as the “All World Theatre” with a 99-cent admission. I was graciously allowed to tour it yesterday and the seating has been replaced by pews. There’s a balcony, and the lobby is basically original but little ornament is visible in the auditorium save the pilasters with its dropped ceiling.

Acme to rehab south side theater.

A Milwaukee company that makes sets and props for video production companies and industrial trade shows plans to rehabilitate a boarded-up theater in the Walker’s Point area for use as a studio and production facility.

Acme will receive $18,200 in new job tax credits, $3,125 in location credits and $655 in sales tax credits, said Mike Brodd, the DCD’s manager of neighborhood economic development. The company has committed to creating four jobs with the project, Brodd said.

Mark Miskimen, who owns Acme Productions, said the new facility would have a separate identity from Acme and probably would have a name that is a play on the old World Theater.

Acme is buying the building from Bob Hoffmann.

Trimmier said city officials are delighted at the reinvestment in the theater building, which is near the key intersection of South Sixth Street and West National Avenue. The city also is pushing for redevelopment of the city-owned four-story Kroeger Building, 611 W. National, which may be sold to Esperanza Unida Inc., a Hispanic community group.

(Oshkosh Northwestern, Sept. 8, 1937) ATANASOFF HAS NO FEAR, NOT EVEN JAIL, SO JUDGE GIVES HIM 4-MONTH TERM Milwaukee: – Sit-downer Andon Atanasoff today faced a four-month sit-down — in the house of correction. Andon, who with his five brothers staged a sit-down in the city attorney’s office in protest against foreclosure on their theater, was sentenced for failure to pay alimony to his divorced wife, Florence. When Andon told Circuit Judge William F. Shaughnessy that he was unable to pay back alimony, Mrs. Atanasoff’s attorney told the court that Andon was “afraid of nothing but jail.” That nettled Andon. “Ha, I am afraid of nothing,” he snorted. “Bring on your jailer.” The judge did.

(Oshkosh Northwestern, June 7, 1936:
ATTORNEY’S OFFICE STILL IS BESIEGED Milwaukee — The six sitting Atanasoffs, who have besieged the city attorney’s office since Friday, were reduced to five today. Andon Atanasoff was in court answering a divorce summons served by his wife, Florence. Andon’s three brothers, Joseph IsMiir and Angel, and the latter’s two wives remained in the office demanding a rehearing of grievances by the common council judiciary committee, which was to meet this afternoon. They charge they lost the World theater last February as the result of a conspiracy and ask that the council pass a resolution they have submitted asking speed in a federal inquiry into their charge. Members of the city attorney’s staff said the brothers apparently had shaved yesterday but that the group looked weary after sleeping three nights on hard benches.

Anybody know anything about the organ that was in this theatre? All I know is that is was Built by Wangerin Organ Co. of Milwaukee. I have one of the pipes that is from the organ. In a book I have on Theatre Organs, it lists the organ as #485, installed in 1926. That’s all the info I have. Looking for other info on size, stoplist, etc. Also where the organ went after it was removed from the theatre.