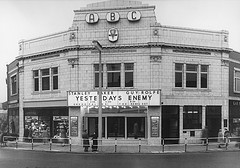 Located on the corner of Seaview Road and Liscard Village. The Capitol Cinema opened on 4th September 1926 with Laura La Plante in "Midnight Sun". Built for an independent operator (architect unknown), the exterior in white glazed terracotta dominated the corner position of the cinema in Wallasey town centre, and the auditorium block was hidden from view behind a parade of shops on each side of the entrance. Inside the auditorium, seating was provided in stalls and circle levels. Above the proscenium was a fibrous plaster feature which depicted three galleons in full sail. There was also a cafe located on the circle foyer level, above the entrance.

The Capitol Cinema was taken over by Associated British Cinemas(ABC) in 1930. It was closed for two months in September 1959 for modernisation, and re-opened on 9th November 1959 with Kenneth Connor in "Carry On Teacher". Now re-named ABC, it had a new giant sized screen installed forward of the old proscenium, and there was wall-to-wall curtaining.

The ABC closed on 23rd February 1974 with Cliff Richard in "Take Me High" and Jack Palance in "The Big and the Bad". Eventually a bingo licence was granted and it re-opened as the independent Capitol Bingo Club in 1978. This continued successfully for many years and was closed around 2000.

The auditorium was demolished in the Summer of 2008, but the frontage, foyer and adjacent parade of shops was retained.