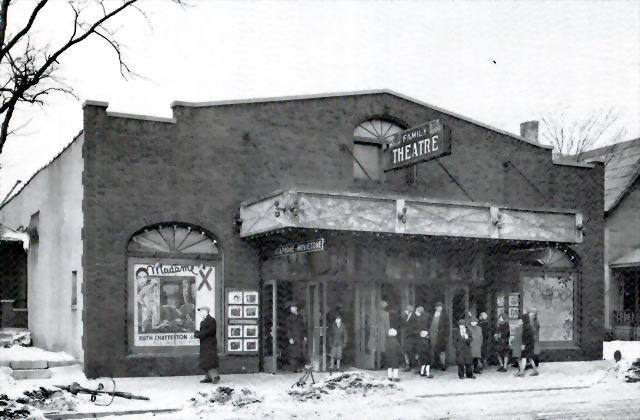 It closed in the early-1970’s after being renamed Cinema and screening adult movies. It has since been demolished. There is a parking lot where the theatre once stood.

345 Michigan N.E. Family Theater. Howard T. Reynolds, one of the sons-in-law of Joseph Poisson, owned this theater until he sold it, along with the Vogue and the Stocking, to Herbert R. Boshoven in early1946 for $135,000. The sale took place just after the theater suffered a devastating fire from a short circuit in the wiring at 6:38 p.m. on Tuesday, February 19, 1946. The extra alarm fire caused a loss of $26,745.43, while the theater’s total value was given as only $29,000. John Muzzal was listed as the occupant or operator of the theater at the time of the fire. It became a Boshoven-Busic theater, owned by Herbert Boshoven, Jr., and Joseph Busic. The 1941 seating capacity was 530. It was known as the Family from the time of its construction until the early 1960’s, when it became the Cinema. (Photo: G.R. Public Museum, in Lynn G. Mapes and Anthony Travis,

Do we have a correct closing date? Description says 1959; the comment shows theatre operating in early 60s. And, is the 1930 year of opening correct?