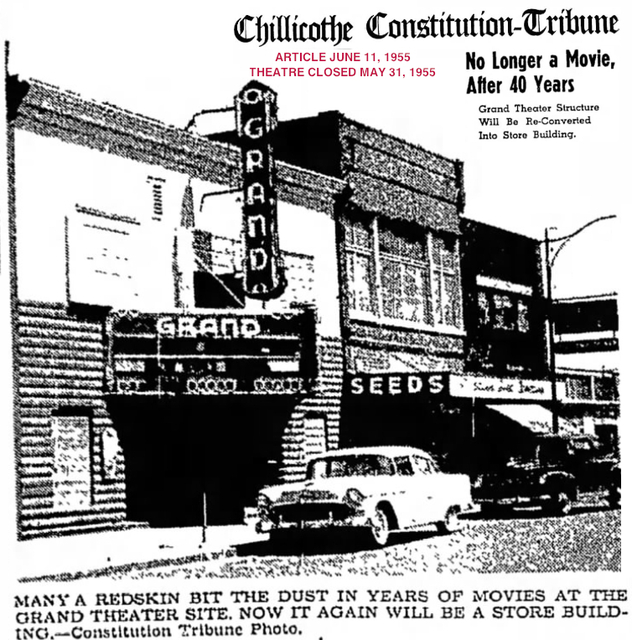 The Grand Theatre closed in 1954 and was later repurposed for a Moore Equipment Co.

Back in the late 1940’s my mother would give me a quarter to go to the Saturday afternoon matinee at the Grand Theater in Chillicothe, Missouri. It cost me fourteen cent to get into the theater which included two Grade B movies (one western and the other a mystery) plus a serial (for some reason I only remember the Superman ones) and a cartoon. The other eleven cents went for a box of popcorn (ten cents) and a penny for the candy machine. It was always a great afternoon. About the only thing I remember about the building itself was the fact that it had a log cabin facade. Frank Griggs

W.P. Cuff had the Empire Theater in downtown Chillicothe and wanted to one-up the veteran house. Cuff would convert a feed store to create his Strand Theatre. The Strand opened November 30, 1920 with the film, “The Bird of Paradise.” The $10,000 lighting system produced audience-pleasing effects and the theater was popular at the outset. Cuff would team up with two Kansas City investors in Johnny Kling and Haley Reed to increase their holdings. The popular Strand Theater eventually attracted a new buyer in the fast-growing Missouri/Kansas/Illinois Dickinson Theatre Circuit which bought the Empire and Strand from Kling in April of 1941. Dickinson would spend $50,000 on the Strand including a new sign and featuring its new name, the Dickinson Theatre. The theater was said to be the only one with an air conditioning system between St. Louis and Kansas City at a cost of $20,000.

Business dealings with the Dickinson Circuit including the Griffiths buying half-interest in Dickinson. So a contest was held to change the name of the no longer appropriate Dickinson. The winner was the Grand Theatre. The Grand was massively renovated into a rustic log cabin inspired theater in 1949. But the theater was limping into the TV era. Entering the 1950s under MidCentral Theatres, the Grand was only open on weekends beginning on May 10, 1952 and then, when MidCentral took on the Ritz, the Grand was not open year round, closing in the summer and then closing as a movie theater for good that year. The theater was re-opened for American Legion and other special events through 1954 before being repurposed for retail in 1955.