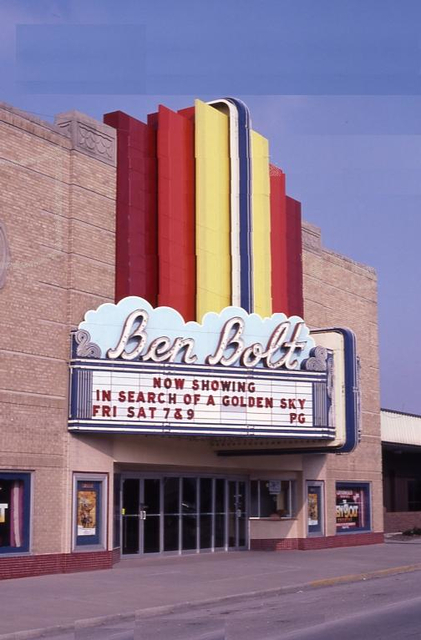 Unfortunately, this late Art Moderne gem was demolished in 1999.

So what has been built on the site, since the Ben Bolt was demolished?

How could I purchase a photo of Mr. Max Thomas in front of the Ben Bolt(the picture that dateline describes in the above post)? I came across a picture of the Ben Bolt on the CinemaTour website and would like to add it to my collection

The July 2, 1949, issue of Boxoffice has an architect’s rendering of the proposed Ben Bolt Theatre. It, too, attributes the design to Boller & Lusk.

Unless I missed it somewhere up above BOXOFFICE reported the Ben Bolt was to be transformed into a Triple Theatre.The Downstairs theatre will have 350 seats and the two upstairs theatres will seat 200.Dolby Sound.Suppose to be ready for mid summer 1985. Source BOXOFFICE June 1985.

Streamline Moderne was the thing in the 1940’s,very nice marquee for all you marquee people like me.

Just an empty dirt lot. What a stupid waste.

Was there someone called Ben Bolt?

It was a play/opera, I believe. The man who wrote the music died in Chillicothe. There’s a zero milestone/memorial to him on the side of the drugstore on the square.

Thomas Kneass, who is buried in Chillicothe, adapted an old German melody to the 1840s poem “Ben Bolt” by Thomas Dunn English. The song was used in a play called “The Battle of Buena Vista” which was first staged during the war with Mexico.

The Ben Bolt Theatre was opened on Aug. 18, 1949, according to a note two days later in BoxOffice. It was built by Theatre Enterprises, Inc. “and named after the old song”. The first movie was It’s a Great Feeling.

“Two murals painted by Frank J. Zimmer, Los Angeles artist, are featured on the wall of the auditorium. Romance of the type suggested by the old song after which the theatre has been named is the theme of the murals, which are made more prominent with black light when the regular house lighting is low.”