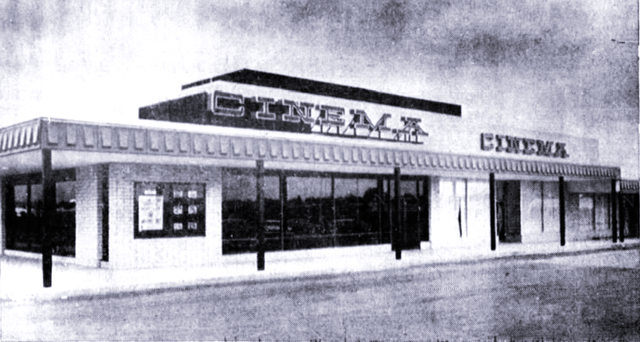 The North West Plaza Cinema was opened as a single sreen theatre on September 26, 1969. The opening movie was “The Christmas Tree” and it has 650 seats. In December 1971 a second screen was built which seated 276. It was gradually expanded to eight screens. It was operated originally by General Cinemas, then by Kerasotes, and finally by Teicher Theatres as a bargain cinema.

It closed in 2009 and is scheduled to be demolished and the site used by a chain restaurant.

Again Teicher lost his lease to the theater for development. He still runs the Drive in seasonally.

“Which drive-in does Teicher run?”

On December 23, 1971 GCC expanded with an additional 276-seat theatre to increase seat count to 1,226 becoming the Northwest Plaza Cinemas I & II. “Star Wars” was a big hit for the main theatre in 1977. But in 1979, the main screen was twinned with the complex becoming the Northwest Plaza Cinemas I, II & III. Fortunes slid in 1987 when matinees were dropped and labor costs were a factor in GCC’s decision not to renew its lease.

The next operator was Kerasotes which hired non-union projectionists which led to a picket upon its opening March 18. 1988. Kerasotes expanded the theatre on July 21, 1989 to eight screens renaming the theatre the Northwest Plaza Cinema 8.

Kerasotes dropped the theatre and Teicher Theaters became its last operator converting it to a short-lived Dollar Movies at Northwest Plaza. The theater closed as Dollar Movies at Northwest Plaza (and should be its official name here) on April 5, 2007. In June of 2007, the theatre was demolished for a proposed project involving multiple restaurants. In 2014, Teicher Theaters would shutter its other remaining locations.

Teicher ran the Airline Drive-In 2 in Winchester when the portfolio was shut down in 2014. I believe that was their only one.

dallasmovietheatres, the opening date that you provided is wrong. It opened on September 26, 1969. here is the ad below.