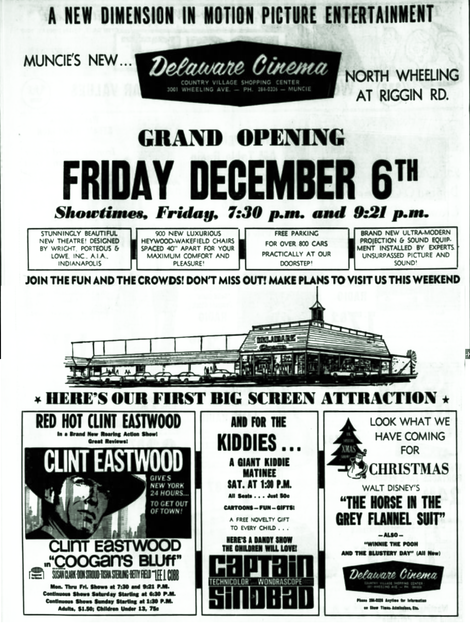 The northside Delaware Cinema opened December 6, 1968 for Mallers Theater Group circuit with “Coogan’s Bluff”. The $500,000 cinema was designed by the Indianapolis architectural firm of Wright, Porteous, and Lowe as a Colonial style theatre at the outer edge of a strip mall, the Halteman Village Shopping Center (later renamed the Country Village Shopping Center). The 868-seat facility would be described as a road-show quality luxury theatre playing films at popular prices.

Equipped with 70mm at opening, the cinema had automatic masking with its 54' by 24' screen and new Ashcraft projectors. Bathed in blue color, the theatre was the first modern Muncie movie house with the previous theatre built just after World War II.

Hits included “The Godfather” with a two month run and “Jaws”. In 1976, the Delaware Cinema was chopped into a duplex as was the Rivoli Theatre. Upon reopening on November 19, 1976, the seat count only dropped to 830 seats with Cinema I having 540 and Cinema II having 290. The theatre went with automated projection to accommodate the doubling of screenings.

After a neighboring store went out of business, the Delaware Cinema expanded to three screens in April of 1989 with a 240-seat new built auditorium. The theater would continue for another 17 years. It next became a bingo hall.

“Why is called Delaware Cinema, its not in the state of Delaware!?”

davidcoppock: Muncie is the county seat of Delaware County, Indiana.

3 screens on April 28th, 1989. Only the regular listing ad appeared in the newspaper.