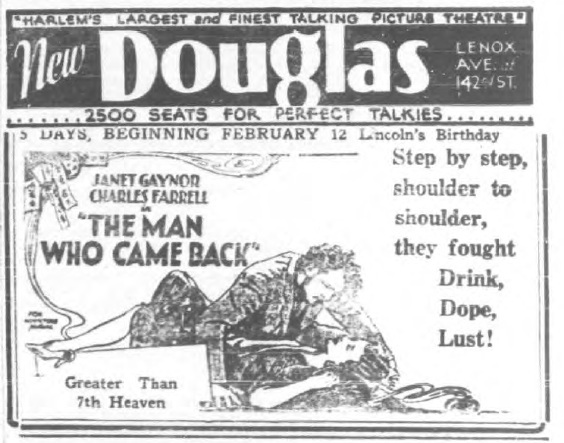 This large theatre opened in 1922 and was designated for the exclusive use of "negroes." This may have been a sign of the growing and empowered African American community in Harlem. By 1927 it was operated by the Meyer & Schneider circuit. The original Douglas Theatre, one block away, was a "whites only" house.

The New Douglas Theatre closed around 1940.

A 1917 article in the New York Times makes reference to a motion picture theatre located at 308 West 143rd Street.

Does anyone have any more information or at least a name?

Does anybody know any more about the current status of the New Douglas Theatre building in New York, or maybe have some photos?

According to “The Encyclopedia of the American Theatre Organ” by Mr. David L. Junchen, pg. 630, the “New Douglas” theatre in New York City originally had a Smith theatre pipe organ installed in 1921.

This organ had a Kinetic blower, serial #J416, which was 5 horsepower and produced 10" of static wind pressure.

The book does not give the size of the organ (# of manuals/ranks not known at the time of publication), but the fact that it has/had a 5 horsepower blower indicates that it is/was probably at least 10 ranks and thus a large organ (for Smith).

Does anybody know where this organ (or its parts) is/are today? Thanks!