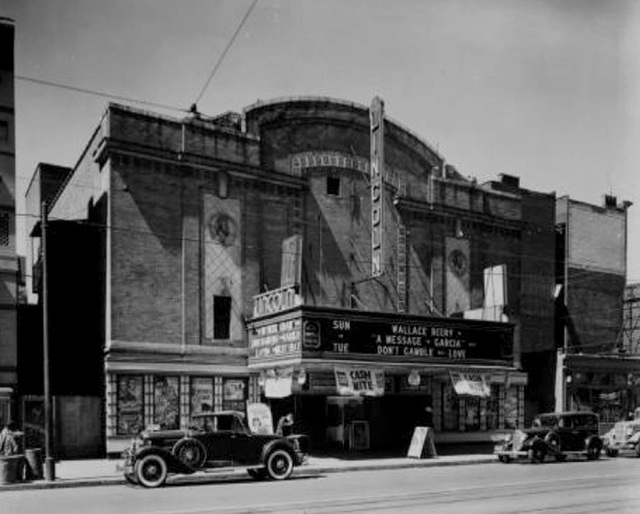 The Lincoln Theatre served as a cinema in the 1940’s and 1950’s, operating by 1950 by Liggett-Florin Booking Service. It may have had a larger seating capacity when originally presenting vaudeville and plays. The 850 comes from Film Daily Year Books. According to a recent article in the weekly New York Press, the Lincoln Theatre first opened in 1915 and was the first theatre in Harlem (then a predominantly white neighborhood) to cater exclusively to a black clientele.

The Lincoln Theatre had its own stock company of black actors, but earned its greatest fame in the 1920’s, when it presented black vaudeville, including such headliners as Bessie Smith, Florence Mills, and Ethel Waters. For a time, the very young Fats Waller was its resident organist.

Since the 1960’s, the Lincoln Theatre has been home for the Metropolitan African Methodist Episcopal Church. Although there have been decorative changes, “much of the structure remains intact, notwithstanding the tiled, 1960’s-era facade and dropped ceilings”, David Freeland reports in the NYP story. “A sturdy rectangular proscenium, richly brocaded in lovely floral patterns, dominates the front interior, while the original sloping floor is steep enough to make first-timers wobble. Best of all, the theater’s boxes were never removed, and their gentle, curving lines add delicacy to a space that appears larger than it really is”.

The 1948 comedy/musical movie “Killer Diller” (made for Black audiences) staring Dusty Fletcher, Butterfly McQueen, Nat ‘King’ Cole and the King Cole Trio, The Clark Brothers and Moms Mabley was filmed inside and on stage of the Lincoln Theatre.

I went by here today on the bus to NYC and as I passed by, it’s quite small and the retro 60s facade looks like those old Cinerama colors.

Still listed as open in the 1947 Film Daily Yearbook.

Excellent Large format Photo from 1938 of Lincoln Theatre and street scene on W.135th Street, Manhattan by clicking on above link.

I have a few good interior photos (RECENTLY TAKEN)of this theater and I am unable to post them as the link is not active when posted.When you move backward not farward is is called retarding.The site functioned so well before it was retarded.I enjoy these old theaters please return to functioning cinemetreasures!!

Ratkat… If you are still following this page, you can upload your photos from the “Photos” tab near the top of this page. You simply need to have them saved on your computer, then you can use the “Add New Photo” function to browse your hard drive for the photo files and upload them. I hope you take advantage of that feature and share your images with us!

with an address of 58 W.135th St. this theater would have been close by the Crescent which was at 36 W. 135th St. and opened on the night of Dec. 16th 1909. using the Manhattan or New York,NY listing the Crescent might very well be the 1st theater built in Manhattan with the intent of showing films.

Bigjoe, “The intent of showing film” implies that feature length films would be the prime subject. That did not occur until 1906 in Australia. In the United States film showings were not continously a main subject until 1915 when the “THE BIRTH OF A NATION” made it popular.