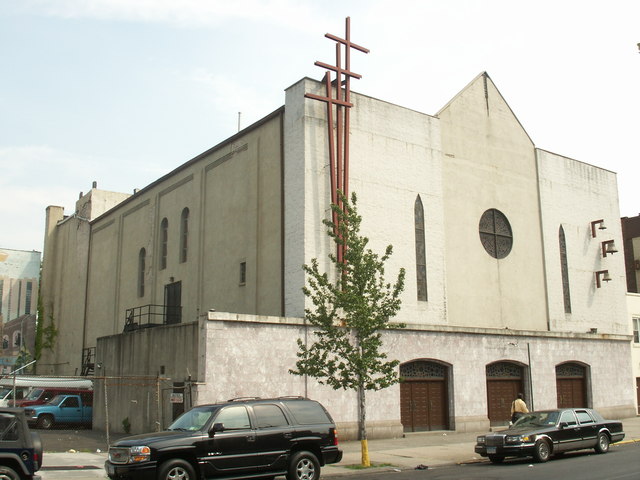 The Lafayette Theater opened as a legitimate theater which also presented vaudeville. It stood on Seventh Avenue (now Adam Clayton Powell, Jr. Boulevard) at 132nd Street in Harlem. It was one of the first theaters in New York City to de-segregate and allow African-American theatergoers to sit in orchestra seats instead of only in the balcony. Later, like so many other former live theaters, the Lafayette Theater switched to movies.

Around 1950 the Lafayette Theater was converted to a church. It became home to the Williams CME (Christian Methodist Episcopal) church. By April 2013, the church had moved out and the building was in the process of being demolished.

Looking for a copy of the Play Bill from the Lafayette Theater’s production of “Haiti” My late sister (Sugar Pie Nowlin) (nee:Beatrice Lewis) was in the chorus and took me to see the show.
We are in the process of doing a family history and this would be a treasured addition.
madam gary

View link great pic among others halfway down…

According to James Trager’s book “The New York Chronology” the Lafayette Theater opened in November, 1912. It was designed by architect Victor Hugo Koehler. Only white patrons were admitted to the orchestra floor until August of 1913, when the Lafayette became the first New York City theater to integrate.

Incidentally, the Office for Metropolitan History’s Manhattan Database lists three theaters designed by Koehler that I’ve been unable to track down. They are: a 1902 project for a four story theater and loft building, 100x100, at the southeast corner of Grand and Chrystie; a 1913 two story movie theater, 41x90, at 11-13 W. 116th Street; and a one story movie theater, also 41x90, at 385-387 Third Avenue. Maybe somebody familiar with Manhattan will be able to identify these theaters.

Joe, The Grand Street theatre on Chrystie and Grand was operating in 1923. I have not entered it to CT as I can find nothing else about it.

The Grant/Jewel at 11 West 116th Street and the Argus/Regent at 385 Third Avenue are already identified as Koehler sites.

This theatre/church is being demolished as i write this, Wednesday afternoon, January 30, 2013. It is possible that the facade facing 7th Ave is being preserved. Don’t know.

AlAlvarez: I found another reference to the Grand Street Theater, this in Ruth Crosby Dimmick’s 1913 book Our Theatres To-day and Yesterday. It says that the house opened on February 4, 1903, as a Yiddish theater. It was leased to Bedford Theatrical Company in December, 1909, and as of 1913 was playing “…Marcus Loew attractions.” I don’t know if that means vaudeville only or vaudeville and pictures. Most of Loew’s early houses in New York appear to have presented both.

why there are no interior pictures.

1933 map of Harlem after prohibition ended. Library of Congress link. Lafayette right of center at top. Image will enlarge.