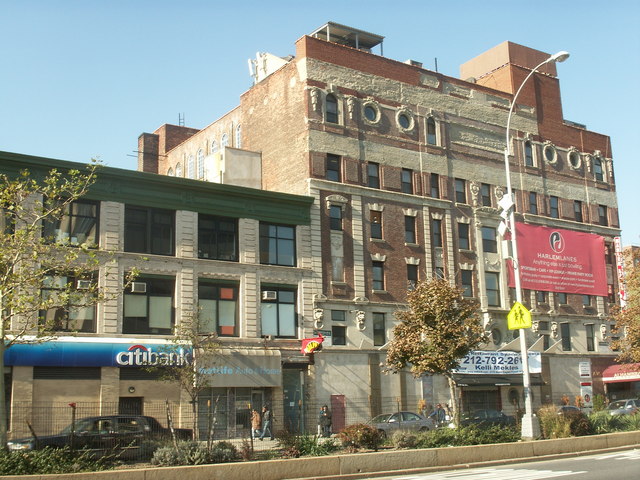 Intrigued by this question I dug through old binders and found a printout of the “Atlas of the City of New York”, 1906 edition, showing the location of the “Alhambra” at the southwest corner of 7th Avenue and 126th Street, which was the location of the Auditorium noted in the NY Times article. It was right next to the Harlem Opera House, which was also a McElfatrick design from 1889. I’ll keep checking to see if there is anything in print about the one becoming the other.

Just looking at the photos on the site Lost posted a few days back for the Pier 2110 Restaurant located in the Alhambra building, it looks as if the interior was completely gutted. Unless the restaurant occupies some space in the building other than the former theater area.

Well, after a little more research… Though the Auditorium was projected to be finished in March 1903 (NY Times article, 9/19/1902), another article in “Architects and Builders Magazine” states that it was “nearing completion” in Jan. 1904. Another NY Times article (3/9/1905) reported that one of the partners who built the Auditorium was declaring bankruptcy, this after a 6-month strike halted work, and his partner’s subsequent suicide in May 1904; the article goes on to say that “there were no funds to continue the enterprise.” A further NY Times article (5/14/1905) announced the opening the next night (“for a Spring season”) of the Harlem Alhambra, noting that “it was started two years ago, but was not completed owing to a series of litigations whereby the work was held up for a long period.” Descriptions of the two theater include similar decorations, the presence of a rathskeller and other accommodations; so it would seems that the two are identical.

â€œWhen (Ethel) Waters lived in Harlem she recalled that 125th street was still a â€˜white boulevardâ€™ and that the theatres on the street were segregated. â€˜Colored people could only buy seats only in the peanut gallery in B.F. Keithâ€™s Alhambra, and none at all in the other white show housesâ€™. â€œ

â€œDespite civil rights statues in northern cities that prevented racial segregation in theatres, the laws were rarely enforced and managers evaded the law. In 1905, two African Americans sued unsuccessfully when they were not permitted to buy tickets to New Yorkâ€™s Circle Theatre. On another occasion black patrons who obtained orchestra tickets were prevented from sitting in the white-reserved section when the manager broke the seats and ordered them to sit in the gallery. Racial segregation in the big-time venues as well as prejudice against black performers contrasted with the circuitsâ€™ publicity which celebrated vaudeville as a â€˜democraticâ€™ entertainment open to everyone.

We purchased a framed tile as part of an auctioned box lot. It measures approx. 3" x 5". The tile itself is not marked. There is a label on the back of the frame from SLOANE & COMPANY, NO. 309 COLUMBUS AVENUE, NEW YORK***pictures and picture frames. “From the Alhambra” is written in pencil on the back near the label. We are wondering if it is a “momento” from the RKO Alhambra. Pictures are available if might assist with identification. Any thoughts?

So, “Cleopatra” not only nearly sunk Fox, but preceded the closing of the Alhambra, eh? In any event, the restaurant that we thought might have occupied part of the former theater space appears to have closed. I’m unable to determine online what, if anything, has taken its place. Also appears that the bowling alley is located on the 3rd floor of the building. Not sure if that exists in what would have been some of the theater space’s upper reaches.

My mother worked at the Alhambra in the box office from the mid-fifties until almost the time the theatre closed in the mid-sixties. Spent a lot of time there as a child. I remember that it used to have live shows, like vaudeville. I also remember when Ray Danton and Karen Steel came to the Alhambra to hype their new movie, “The Rise and Fall of Legs Diamond”. Lots of history in that building.